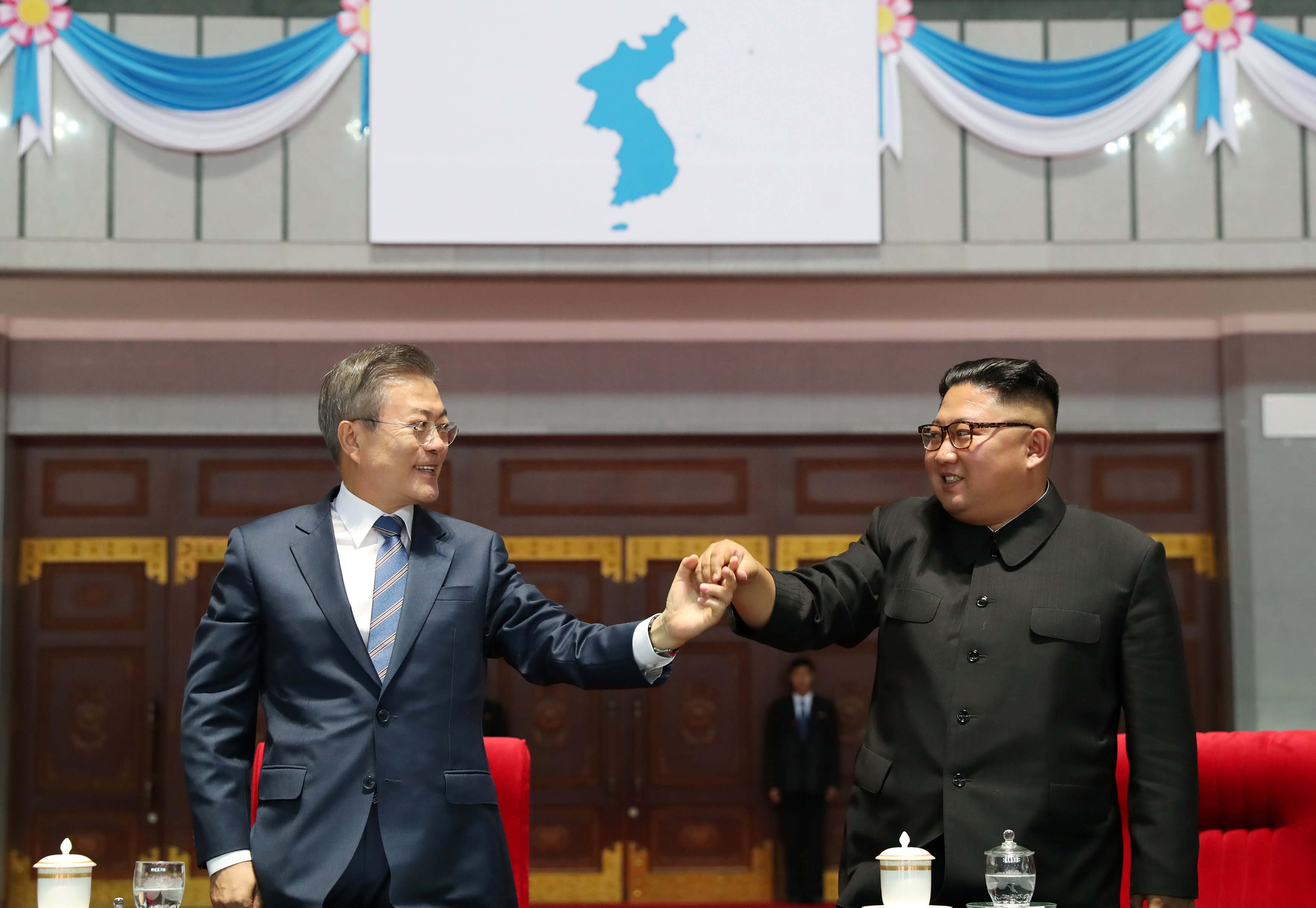 The United States said it was ready to resume talks with North Korea after Pyongyang pledged on Wednesday to dismantle its key missile facilities and suggested it would close its main Yongbyon nuclear complex if Washington took unspecified actions.

U.S. Secretary of State Mike Pompeo said he had invited North Korea’s foreign minister to meet in New York next week, with the aim of completing its denuclearisation by January 2021, after a Pyongyang summit between the leaders of the two Koreas.

The United States appeared eager to seize on commitments by North Korean leader Kim Jong Un at his talks with South Korean President Moon Jae-in even as critics said the steps did little to put Pyongyang on a course for irreversible denuclearisation.

North Korea will allow experts from “concerned countries” to watch the closure of its missile engine testing site and launch pad at Tongchang-ri, Moon said at a joint news conference with Kim after their meeting in the North Korean capital.

The sudden revival of diplomacy followed weeks of doubts in U.S. President Donald Trump’s administration’s about whether North Korea was willing to negotiate in good faith after a June summit between Trump and Kim yielded few tangible results.

The January 2021 completion date was the most specific deadline set in what is expected to be a long process of trying to get the North to end its nuclear programme, which may threaten U.S. allies South Korea and Japan as well as the U.S. homeland.

In addition to inviting North Korean Foreign Minister Ri Yong Ho to meet when both are in New York next week for the annual U.N. General Assembly gathering of world leaders, Pompeo said Washington invited Pyongyang’s representatives to meet the U.S. special representative for North Korea, Stephen Biegun, in Vienna at the “earliest opportunity.”

China, North Korea’s most important economic backer and diplomatic ally, said it warmly welcomed the agreement reached in Pyongyang and strongly supported it.

“We absolutely cannot let this hard to come by opportunity for peace slip away once again,” the Chinese government’s top diplomat, State Councillor Wang Yi, said in a statement.

At the summit, the two Koreas agreed on plans to resume economic cooperation, including working to reconnect rail and road links. They agreed as well to restart a joint factory park in a border city of Kaesong and tours to the North’s Mount Kumgang resort, when conditions are met.

U.S. officials suggested Kim was trying to ease the economic pressure on him to curb his nuclear programs and to undercut the rationale for U.S. troops being based in South Korea by improving relations with Seoul.

The United States has some 28,500 U.S. troops in South Korea to deter North Korean attack. Pyongyang has long sought their withdrawal and Trump has questioned their rationale and cost.

“There is nothing the North has offered so far that would constitute irreversible movement toward denuclearisation, however you define that, by January 2021 or any other time, or even a reduction of the military threat it poses to the South and the region,” said a U.S. intelligence official.

“Everything that’s out there now is conditional on U.S. actions that would reduce the pressure on the North to cooperate or (is) filled with loopholes and exit ramps,” added the official, who spoke on condition of anonymity.

U.S. officials said the ambiguity about what Washington was supposed to do for the North to close its nuclear complex at Yongbyon gave Kim room to argue that Washington had not done enough for North Korea to follow through on its pledges.

Even if North Korea were to shut down Yongbyon, officials and experts believe it has other secret nuclear facilities.

South Korea’s national security adviser, Chung Eui-yong, said the reciprocal U.S. steps could include an end-of-war declaration. South Korea and the United States remain technically at war with North Korea because the 1950-53 Korean War ended in an armistice and not a peace treaty.

Though Wednesday’s inter-Korean agreement failed to stipulate the North’s commitment to declare nuclear and missile facilities for inspection and eventual decommissioning, Seoul has been in talks with both Pyongyang and Washington over the issue, a senior South Korean official said.

“What North Korea really wants and their priorities may be different from ours,” the official told reporters on Thursday on condition of anonymity.

“We’re talking about a package that would carry many elements, including the declaration of the facilities, Yongbyon and Tongchang-ri, which are of U.S. interest, and from the North side, the issues of normalizing relations, ending the war and easing sanctions.”

Despite the doubts of U.S. officials and outside analysts, North Korea’s pledge at the summit with the South Korean president drew an enthusiastic response from Trump.

Speaking before Pompeo’s comments, Trump‏ welcomed Kim’s pledges, calling them part of “tremendous progress” with Pyongyang on a number of fronts, and hailing “very good news” from the summit between the Koreas.

Kim pledged to work toward the “complete denuclearisation of the Korean peninsula” during two meetings with Moon earlier this year and at his summit with Trump.

But discussions over how to implement the vague commitments have since faltered and North Korea has consistently refused to give up its nuclear arsenal unilaterally.

Washington has demanded concrete action, such as a full disclosure of North Korea’s nuclear and missile facilities, before agreeing to Pyongyang’s key goals, including an easing of international sanctions and an official end to the Korean War.

While North Korea has stopped nuclear and missile tests in the past year, it did not allow international inspections of its dismantling of its Punggye-ri nuclear test site in May, drawing criticism that its action was for show and could be reversed.

The day after the June 12 Trump-Kim summit, Pompeo said he hoped to achieve “major disarmament” by North Korea by the end of Trump’s first term in January 2021.

His latest statement that the process “should be completed by January 2021” may be a signal Washington will not wait forever.

“Invoking the end of Trump’s term in January 2021 is another way of saying to the North that American patience is not unlimited and that Kim Jong Un won’t be able to sidestep denuclearisation indefinitely,” Russel added

John Paul Cordina   July 14, 2020
Though May saw most EU countries start to lift Covid-19 containment measures, the number of applications for asylum remained significantly reduced, with the 10,200 applications representing a staggering 84% drop from pre-Covid levels.

Reuters   July 14, 2020
Sanofi, which is hosting a virtual research and development event, and GSK had said in April the vaccine, if successful, would be available in the second half of 2021.

PN opposing its own proposal on appointment of President – Zammit Lewis

John Paul Cordina   July 14, 2020
Justice Minister Edward Zammit Lewis lamented that Nationalist Party MPs have chosen to oppose a proposed reform in the method of appointing the president which is practically identical to a proposal the party had made five years ago.