U.S. prosecutors have charged two sons of former Panamanian President Ricardo Martinelli in connection with bribery and money laundering tied to Brazilian construction firm Odebrecht, according to a federal complaint unsealed on Monday.

Last week the two former presidents of Panama, Ricardo Martinelli and Juan Carlos Varela, have been banned from leaving the country while under investigation for money laundering in separate corruption cases, government authorities said on Thursday. 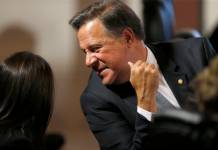 Martinelli, who served from 2009 to 2014, is suspected to have improperly diverted public funds in the purchase of a media outlet while president as part of the so-called “New Business” case, local media and officials said.

Speaking to reporters on Thursday, Martinelli called the charges “political persecution” and accused Panama’s judicial system of not following due process.