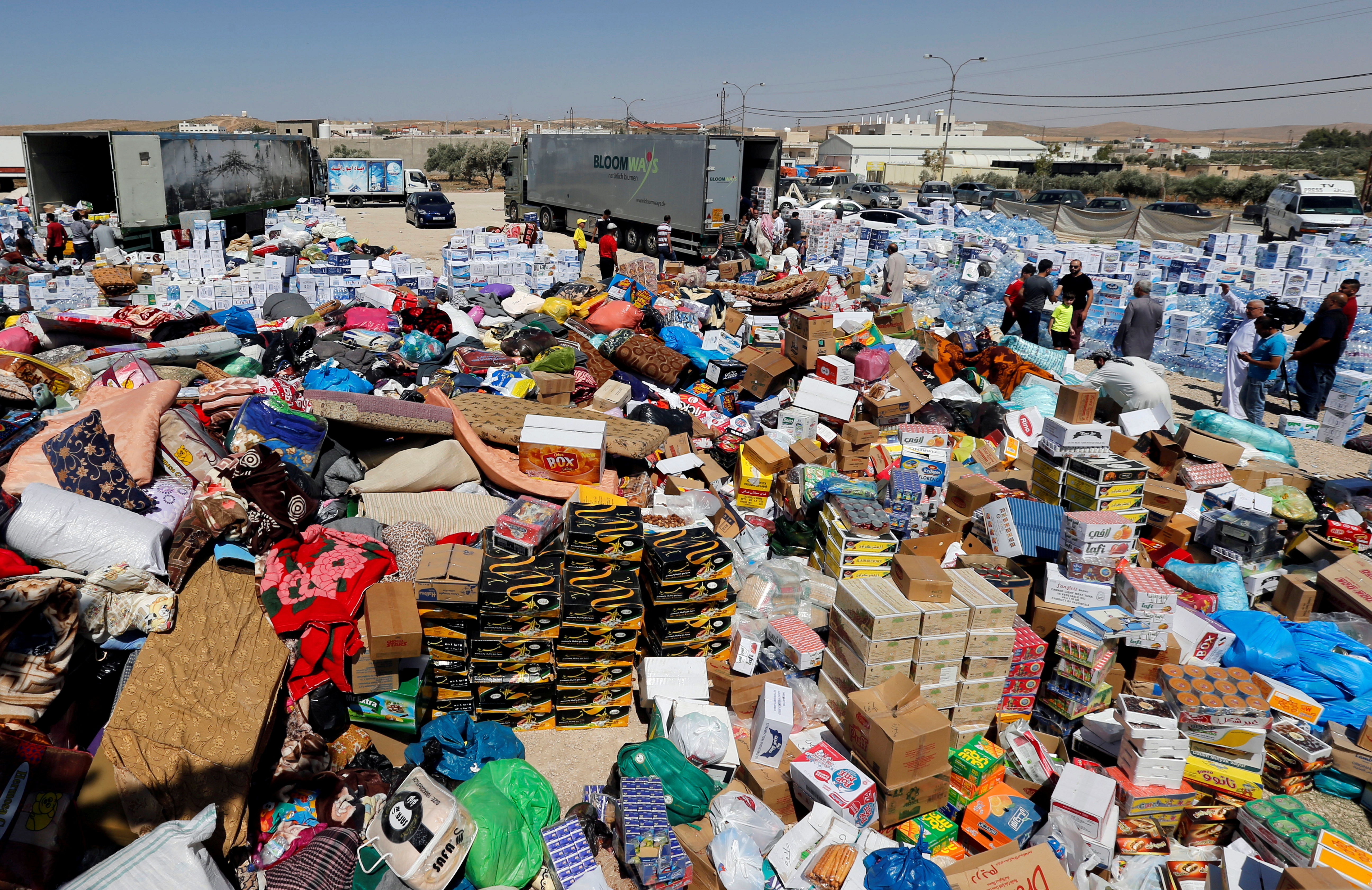 AMMAN (Reuters) – A United Nations aid convoy on Saturday reached the Rukban refugee camp in Syria where thousands of people are stranded in the desert, close to the border with Jordan, a member of the camp’s local council said.

“The first convoys have entered the camp,” said Abu Abdullah, a member of the civilian council that runs the camp and has coordinated with the U.N. on humanitarian aid convoys.

The United Nations said it was delivering food, sanitation and hygiene supplies, nutrition and health assistance to 50,000 people in Rukban, an area under rebel control, in an operation expected to take three to four days.

The Syrian Arab Red Crescent is also taking part in the convoy, which will also involve an emergency vaccination campaign for 10,000 children against measles, polio and other diseases, a U.N. statement said.

“While this much-needed delivery is an important achievement, a longer-term solution must be found for the many civilians living in Rukban,” said Ali al-Za’tari, the U.N. resident and humanitarian coordinator in Syria.

“We also recognise Russia’s role in persuading the regime to finally comply with the UN Security Council’s authorizations for the delivery of cross-line humanitarian aid by issuing the administrative approvals required for this convoy to move,” State Department spokeswoman Heather Nauert said in a statement.

“We hope to see Russia use its influence with the regime to address the continued lack of humanitarian access across much of Syria,” she added.

More than half a million people have died in the Syrian conflict since it began in 2011, and half the pre-war population have fled their homes, including more than 5 million who have gone abroad.

Rukban, located close to the Tanf U.S. military base in the desert near where the borders of Syria, Jordan and Iraq converge, is home to more than 50,000 people whose last U.N. aid convoy arrived in January.

The camp was last month besieged on the Syrian side of the border by the Syrian army, preventing smugglers and traders from delivering food.

Though a U.S.-backed rebel group controls the area, it abuts Jordan’s border and is encircled by the Syrian army.

Jordan has put a block on aid crossing the frontier after allowing the January delivery through its territory, and says it should not be held responsible for conditions in the camp.

U.N. relief trucks had planned to deliver aid to Rukban a week ago after gaining clearance from Damascus, but were delayed for logistical and security reasons, the United Nations said.

Shortages of food and medicine at the camp have caused at least a dozen deaths in recent weeks; the United Nations described conditions there as “concerning” and said thousands of lives were at risk.

Since Russia entered Syria’s war in support of President Bashar al-Assad in 2015, Assad has recovered large swathes of ground. Islamic State insurgents, who once controlled much of Syria, have lost almost all their territory. Front lines between the remaining contested areas appear to have stabilised for now.

However, many refugees and internally displaced people fear to return home because of poor living conditions, conscription into the military or worry over reprisals.

Reuters   January 23, 2020
China is putting on lockdown a city of 11 million people considered the epicentre of a new coronavirus outbreak that has killed 17 and infected nearly 600, as health authorities around the world scramble to prevent a global pandemic. Authorities confirmed 571 cases and 17 deaths by the end of Wednesday, China's National Health Commission said.