Two youths aged 18 and 23, from Paola and Tarxien respectively were arrested in connection to an armed robbery in Pembroke on Monday afternoon.

In a statement the police said that the two men were arrested within hours following a joint investigation by the Criminal Investigations Department, the Rapid Intervention Unit and the St Julian’s District Police.

Pembroke beachgoers held up at gunpoint 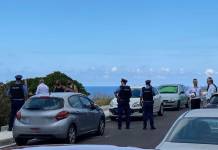 Three men who went for a swim in the vicinity of Madliena Tower in the limits of Pembroke were victims of an armed robbery on Monday afternoon, with two youths holding them at gunpoint and making off with one of their bags.

The two youths were arrested around 5.30pm when they were spotted inside a BMW near the boathouses in Baħar ic-Cagħaq. The police said that when they stopped the youths, they attempted to flee the scene however were encircled by the police.

In a statement Assistant Police Commissioner Sandro Gatt who is responsible for CID remarked that the arrest of the two individuals within hours went to show that the joint investigation between the different departments, the timely action and the description of the alleged aggressors led to their arrest.

The police found the weapon allegedly used in the robbery.

Thief on the run after stealing money from Bormla shop