Seven turtle nests around Malta and Gozo have yielded a total of 320 hatchlings during this nesting season, the Environment and Resources Authority said on Friday, noting that this was the most successful turtle nesting season in local recorded history.

This nest yielded a further 10 hatchlings thus bringing the nest’s total to 71 hatchlings and bringing this year’s turtle nesting season to a successful close. 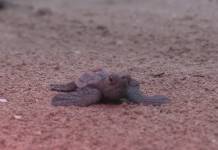 Out of the seven nests, three went unreported up until the time of hatching.

ERA explained the reasons behind the unsuccessful nests found at St Thomas Bay, Marsaskala and the first reported nest at Għadira Bay.

The low success rate in the case of St Thomas Bay was due to the nest being located in a central part of the beach and thus being exposed to heavy foot traffic.

ERA remarked that this situation showed clearly what can occur if a turtle nest is not properly protected through legal and physical on-site measures such as cordoning. In this instance protection was not given to the nest as it was not reported, hence proper measures could not have been put in place.

In the case of the first reported nest at Għadira Bay, the low success rate can be attributed to the heavy rainfall which was experienced towards the end of the incubation period. ERA noted that the location of the nest was susceptible to flooding due to its elevation and its proximity to the path through which rainwater is discharged to the sea.

The environmental watchdog said that while mitigation measures were implemented through the use of sandbags and gullies, the nest ultimately yielded a total of 17 hatchlings.

ERA thanked Nature Trust Malta, the Environment Ministry, and all the volunteers who contributed their time.