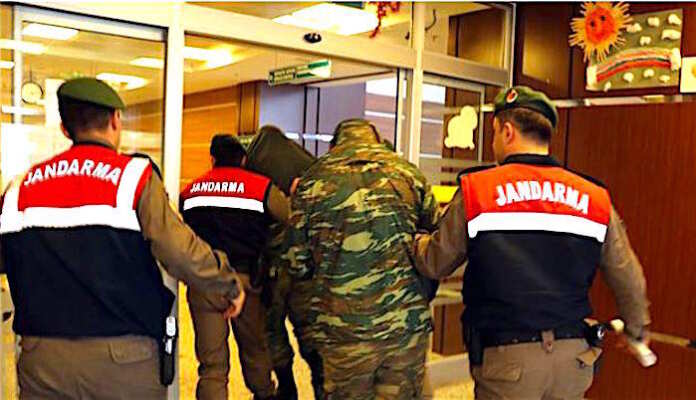 A Turkish court has ruled to keep in custody two Greek soldiers who were detained in Turkey in March, the Hurriyet newspaper reported on Tuesday, in a case which has escalated tensions between the two neighbouring NATO allies.

Greece says the soldiers crossed into Turkey by mistake while following the trail of suspected illegal migrants. Turkish courts have ordered their detention pending trial on suspicion of illegal entry and attempted military espionage.

The court decision comes a few days after Greek Prime Minister Alexis Tsipras and Turkish President Tayyip Erdogan met in Brussels, on the sidelines of a NATO summit, and agreed to focus on efforts to reduce tensions in the Aegean.

The Turkish court in Edirne, a northwestern province bordering Greece and Bulgaria and where the two soldiers were detained, held its monthly hearing on whether to release the soldiers from custody, Hurriyet reported on its website.

The judge ruled against the soldiers’ request to be freed, it said. The two soldiers have not yet been indicted.

Court officials contacted by Reuters declined to comment on the case.

Greece’s Deputy Defence Minister Fotis Kouvelis criticised the court decision and reiterated that Athens would not engage in any trade-off to secure the release of the two soldiers.

“They remain in custody for more than four months without having charges pressed against them,” he told Real FM.

Eight Turkish commandos are seeking asylum in Greece after commandeering a helicopter to flee Turkey as a coup against President Tayyip Erdogan crumbled in July 2016.

Turkey says they were involved in the abortive putsch and demands they be returned to face trial but Greek courts have so far rejected Ankara’s requests.

“No one can suggest that there can be a trade-off,” Kouvelis said.

Greece and Turkey have been at odds over a host of issues from ethnically divided Cyprus to rights in the Aegean Sea.

In past decades relations between the two have at times been tense but in recent months rhetoric on both sides has taken a marked turn for the worse, particularly after the collapse of peace talks in Cyprus in July 2017.