Turkish President Tayyip Erdogan said on Monday that a four-day lockdown would be imposed in 31 cities from Thursday as part of efforts to stem the spread of the coronavirus.

Turkey has imposed such measures over the past two weekends. Speaking after a cabinet meeting, Erdogan said the lockdown would be longer this time due to a national holiday that falls on Thursday, adding that weekend lockdowns could continue “for some time”.

Over the weekend, the number of confirmed cases in Turkey exceeded any country outside Europe and the United States. Total cases rose to 90,980 on Monday.

Health Minister Fahrettin Koca said 123 people had died in the past 24 hours, bringing the death toll to 2,140.

Koca has said the rate of increase of confirmed cases in the country has slowed, despite an increase in testing numbers in recent weeks. He said a peak would be reached in the number of cases in coming days.

Erdogan said Turkey aimed to bring the outbreak to a level that would allow for a normalisation of life after the Eid al-Fitr religious holiday at the end of May, adding that steps could be taken before that.

A total of 13,430 people have recovered from the new coronavirus so far, the minister said, adding that nearly 674,000 tests had been carried since the outbreak began.

Turkey has most coronavirus cases outside Europe and U.S 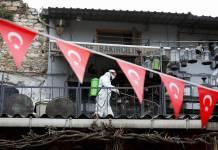