“This is an assault on the Capitol of Liberty and on the rule of law,” said President-elect Joe Biden. In an address originally planned to deal with economic issues, Biden called on Trump to go on national television to defend the Constitution and end.the siege of the Capitol. Describing himself as shocked and saddened, Biden said that true and decent America will prevail in spite of incitement to hate.

Just after the speech, Trump called on the rioters to go home

Earlier, Trump supporters entered the Capitol building after clashes with Police. Former DC Police Chief was reported as saying that this was as close to a coup as the US ever got. International media called this “a dangerous spectacle”, an “insurrection” and an “attempted coup”. CNN said that the uprisings were ‘a Trump legacy’ and the protesters were receiving encouragement from the outgoing president.

Posts on twitter show people in the US Capitol while police try to keep control. Protestors broke the windows and stormed the Senate floor. Members of the senate were evacuated and told to shelter in place.

Officials at the US Capitol had to go into lockdown, and lawmakers had to seek shelter in their offices, as protesters with Trump flags were seen storming through the building.

Earlier US vice-president Mike Pence declared that he will not intervene to stop the certification by Congress of Democrat Joe Biden’s election victory.

According to Pence statement, “The Constitution constrains me from claiming unilateral authority to determine which electoral votes should be counted and which should not.”

“Four years ago, surrounded by my family, I took an oath to support and defend the Constitution, which ended with the words ‘So Help me God,” he said.

Alyssa Farah, Donald Trump communications director till a month ago, called on the president to condemn the actions of his supporters as they stormed the US Capitol. 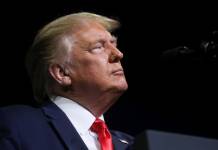 Trump affirms that Mike Pence will be 2020 running mate