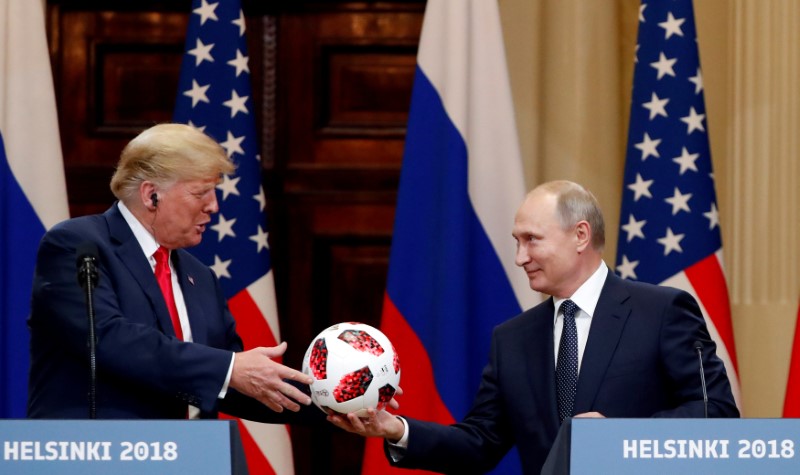 U.S. President Donald Trump defended his efforts to build a relationship with Vladimir Putin in an interview broadcast on Friday after he invited the Russian leader for a second meeting in the midst of an uproar over their first.

Trump’s administration has sought to control the damage from Monday’s summit in Helsinki, where the president astonished the world and drew sharp criticism at home by siding with Putin over U.S. intelligence agencies on Moscow’s meddling in the 2016 presidential election.

As the White House tried to put some distance between the two leaders, Trump made a jarring move in the opposite direction on Thursday, offering to host Putin in Washington in the fall.

In a television interview taped on Thursday, Trump said that he and Putin, who U.S. intelligence agencies say directed interference to sway the 2016 vote toward Trump, had a rapport during their Helsinki meeting.

“Look, the fact is we got along well,” he told CNBC, adding that the two did not agree on everything.

“So I had a meeting that lasted for more than two hours. It wasn’t always conciliatory in that meeting,” Trump said, without elaborating. “We discussed lots of great things for both countries, frankly.”

Five days after the Helsinki meeting, U.S. officials and lawmakers remained in the dark about what the leaders discussed in their two-hour, one-on-one session with only interpreters present.

Trump listed on Twitter the topics he and Putin talked about, but has not given details. U.S. Secretary of State Mike Pompeo told ABC Radio Australia on Thursday the two leaders “broke some ground across a broad range” of issues. He gave no details.

Conflicting messages from the White House this week added to the confusion after Trump’s overseas trip, during which he appeared to draw closer to Russia after alienating NATO allies.

Upon returning from Helsinki, Trump said he had misspoken at a joint news conference with Putin when he questioned why Russia would have interfered in the 2016 election.

On Wednesday, the White House said Trump’s answer of “no” to a reporter who asked if Russia was still targeting the United States was just his declining to answer questions.

On Thursday, after an outcry in Congress, White House spokeswoman Sarah Sanders issued a statement that Trump “disagrees” with Putin’s proposal to have Russian officials question Americans suspected of illegal activity by Moscow, including a former U.S. ambassador to Moscow, Michael McFaul. She had said on Wednesday the proposal was being considered.