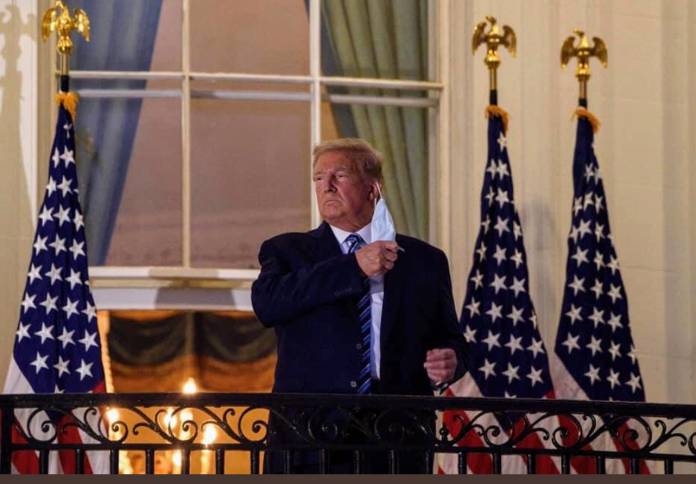 U.S. President Donald Trump on Monday left the Walter Reed National Military Medical Center where he was receiving treatment for COVID-19 to return to the White House.

Wearing a mask, Trump walked from a hospital building to a limousine that took him to Marine One for the short helicopter flight to the White House.

He replied to a shouted question by a reporter about how many people are infected at the White House by saying: “Thank you very much.”

Trump told Americans “to get out there” and not fear COVID-19 as he returned to the White House on Monday after a three-night hospital stay to be treated for the virus and removed his white surgical mask to pose for pictures.

Asked how he felt on arrival at the White House, where his staff has been hit by infections and his re-election campaign dogged by the pandemic, Trump said: “Real good,” according to a pool report by a journalist covering his return on behalf of other media.

Trump wore a mask as he left the helicopter that flew him back from a military hospital outside Washington and climbed the stairs of the White House South Portico, where he removed it and posed for pictures, waving, saluting and giving thumbs-up signs.

He then turned to walk into the White House, his mask still in his pocket, TV footage showed.

Trump has played down a disease has killed more than 1 million people worldwide and more than 209,000 in the United States alone – the highest death toll of any country.

The Republican president, running for re-election against Democrat Joe Biden in the Nov. 3 U.S. election, was admitted to the Walter Reed Medical Center on Friday after being diagnosed with the disease caused by the novel coronavirus.