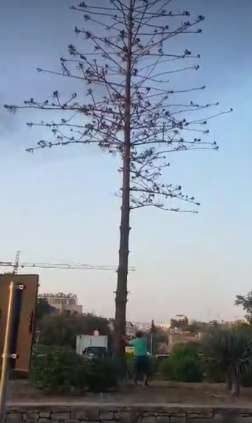 A video of a tree being cut down at the University of Malta campus was shared on Facebook, and the student community was appalled.

In a Facebook post, KSU has now shared that according to the University Estates, Facilities and Capital Development Directorate the tree was in fact dead and posing a health and safety hazard for passers-by especially during bad weather.

Earlier, Kunsill Studenti Universitarji Secretary General, William Farrugia, said on Facebook that nothing can be done since the tree had already been felled. However, he said that the KSU will be investigating the case and discover what plans, if any, are being cooked up for the vacant space.

In its place, KSU has taken the initiative to plant a number of indigenous trees in the coming weeks.

The tree, which has ‘seen’ thousands of students get their degrees, was situated close to the Student House and the Chapel, near the Dun Karm Square area.

Many students have expressed their frustration about this situation.