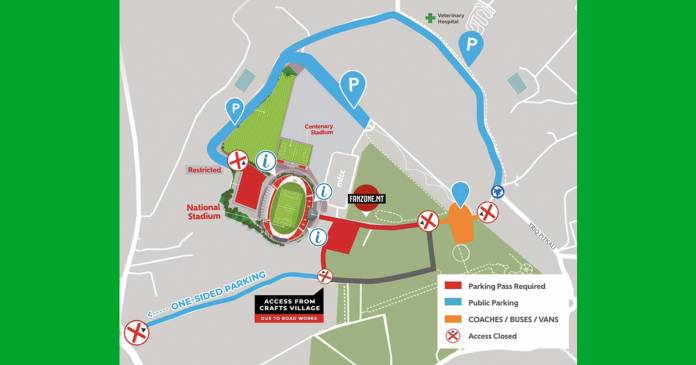 The police announced traffic arrangements ahead of the EURO 2020 Group F qualifier between Malta and Sweden. The match will kick-off at 8.45pm at the National Stadium on Saturday.

On Saturday morning, the ring road will be closed as early as 8am.

The police encouraged fans to pass through Pitkali Road or Triq Durumblat on their way to the National Stadium on Saturday. Road works are still on-going at the Crafts Village area, with the police warning motorists to avoid the area. A map which was published by the police and the Malta Football Association shows a number of public parking facilities on the way to the National Stadium. The public parking facilities are marked in light blue.

Zones marked in red is restricted to those in possession of a dedicated parking pass.

The traffic and crowd management arrangements were made following a collaboration between the Malta Football Association and the Police.

Amy Borg   January 24, 2020
Former minister Chris Cardona spoke on the TVM current affairs program XTRA of his increasing sense of unease and perception that somehow he was being linked to the assassination of Daphne Caruana Galizia.

Mario Schiavone   January 24, 2020
During his installation in the capital Lomé, Togo’s newest archbishop called on presidential candidates to be “servants of the people.”