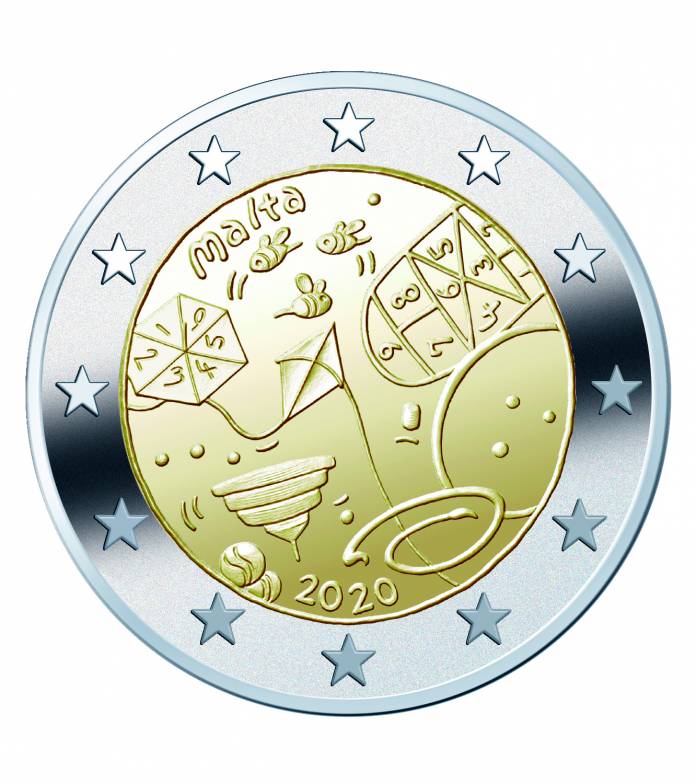 A design by student Ymen Riahi, who attends St Nicholas Middle School in Rabat, was chosen for the last of a series of five €2 coins from the ‘From Children in Solidarity’ programme.

The young artist was inspired by traditional games popular with Maltese children. In fact, he depicts a melange of games including marbles, spinning tops and traditional kite-making and flying. Depicted is also a Maltese version of hop-scotch which is known locally as ‘passju’. Three bees flying in a circle allude to a popular chant sung by Maltese children during play.

Included in the design is the name of the issuing country, Malta, and the year of issue, 2020. The ‘From Children in Solidarity’ coin programme was officially launched in 2015 by the Central Bank of Malta, in collaboration with the Ministry of Education and the Malta Community Chest Fund Foundation. Run as a competition, children were invited to come up with designs for the five coins, one of which was issued every year.

Profits from the sale of the coin cards are channelled in aid of the Malta Community Chest Fund Foundation. The coin reverse shows the common €2 side. The obverse (national side), which was designed by the student, was engraved by Noel Galea Bason.

These commemorative coins were struck in circulation quality at the Monnaie de Paris in France and will be issued in rolls of 25 coins each as well as in coin cards. The issue is limited to 220,000 coins, of which 200,000 will be issued in rolls and 20,000 will be available in cards. The cost of a roll of 25 coins is €70, while that of a coin card is €7.

Coins may be purchased from the MCC counter at the main building of the Central Bank of Malta, Castille Place, Valletta from 8.30am to 12.30pm, or online from the MCC e-shop on www.maltacoincentre.com.

For further information, the public is kindly requested to contact the Malta Coin Centre via email on mcc@centralbankmalta.org or by calling (+356) 2550 6006/7/8.