The unexplained deaths of hundreds of elephants in Botswana have been caused by toxins made by microscopic algae in water, according to wildlife officials.

The Southern African country is home to a third of Africa’s declining elephant population.

Elephant carcasses were spotted in the Okavango Delta between May and June. 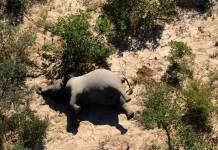 A total of 330 elephants are now known to have died from ingesting cyanobacteria. Officials have ruled out poaching as a cause of death.

The bacteria can occur naturally in standing water. They sometimes grow into large blooms known as blue-green algae.

The cause of death was determined following months of tests in specialist laboratories in South Africa, Canada, Zimbabwe and the United States.

The Department of Wildlife and National Parks’ Principal Veterinary Officer Mmadi Reuben explained that the latest tests have detected cyanobacterial neurotoxins to be the cause of deaths. The bacteria is found in water.

Reuben was quoted saying that the unexplained deaths had stopped towards the end of June 2020 when the water pans dried out. He added that the authorities still have many unanswered questions related to the deaths and the case remains under investigation.