In Barcelona, people from all walks of life are suddenly finding themselves exposed to hardship and occasionally hunger. The Spanish city, renowned for its architecture, culture and thriving business sector is the midst of an economic crisis.

Barcelona based organisation ‘Neighbour to Neighbour’ said that whilst they used to deliver 2.5 tonnes of food per month, since the pandemic the amount increased to 100 tonnes.

New poverty caused by the pandemic is hitting countries all over Europe, especially cities whose economy is dependent on tourism.

Vienna, the Austrian capital, is also facing similar hardships. NGOs reported that food stocks were shrinking since people have been left without work and exposed to hardships, including hunger.

This concern was also raised here in Malta by various quarters.

‘It is worth noting that along these years the at risk of poverty threshold (60% of the median of the national Equivalized Income) and the minimum wage have been almost at par. Therefore, a minimum wage earner with one dependent person, being adult or child, falls automatically under the at risk of poverty and social exclusion threshold’ noted Fr Charles Tabone O. P. in his blog Addressing Poverty.

In a statement made on Saturday, Partit Nazzjonalista said small business are lamenting that low cash flows and late payments will put employees’ jobs at risk. Bars and clubs have been closed since August.

Apart from hotels, bars and clubs, difficulties are being faced by the aviation sector. Only last month ground handlers at Aviaserve had their contracts terminated due to challenging times being faced because of the pandemic. 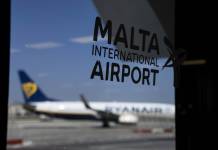