The Tourism Ministry is now responsible for Ambjent Malta, a department which was established in August 2018 and which took over the remits of the Directorate for Parks, Afforestation and Countryside Restoration.

According to the subsidiary legislation which established the entity, Legal Notice 1 of 2020, the department should fall under the Ministry of the Environment.

A notice published in the Government Gazette shows that National Parks, Countryside and Valley management now fall under the responsibility of the Tourism Ministry.

However according to the legal notice, the Minister defined in the subsidiary legalisation, is the minister responsible for the environment. Article 5 of the legal notice explicitly states that the Minister for Environment also has the power to authorise the agency to enter into any agreement with any government entity or environmental non-governmental organisation or any third party for the management of any identified natural capital site. The latter is subject to the necessary approvals by the Government Property Division.

Tourism Minister Julia Farrugia Portelli confirmed to Newsbook.com.mt that she is in charge of the entity.

To date, Ambjent Malta Establishment Order has not been amended to reflect the change in minister responsible for the agency.

A parliamentary question by Opposition spokesperson for the environment Jason Azzopardi, had revealed that when Ambjent Malta was set up it lacked the necessary legislation to function legally. The legal instrument which authorized the agency to exercise its authority had failed to materialise before its establishment. 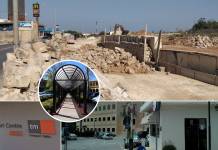