A number of torches have been lit near Mater Dei Hospital’s A&E department and near its mortuary in honour of the elderly victims of Covid-19.

The event was planned in light of the sharp increase in Covid-19 contagion and death among the elderly.

On behalf of the organisers, Martina Caruana highlighted that the elderly had an important role to play in society, and that the wisdom they have accumulated over the years, as well as the reflections and experiences they shared even in their last hours were invaluable.

“It is too sad to see them go with little or no possibility to relate to their loved ones in the final moments of their lives. It is painful for family and friends not to be able to support them as they normally would,” Caruana said. “Tonight’s action shines a light on this stark reality and on the importance that each individual, in whatever position in society they hold, is responsible and must act in a manner that respects the lives and wellbeing of each other, particularly the vulnerable.”

She insisted that the suffering of the elderly and of their loved ones should not be diminished by dismissing the fact that these deaths were nevertheless premature.

“This is an emergency. Let us contain death and restore dignity through responsible action,” she maintained.

The pandemic has claimed 31 lives in Malta so far, and the number of deaths has been increasing. The 11 deaths reported over the past week exceed the 9 reported during the entire first wave of the pandemic between March and June. 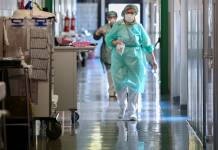