Three of the 27 asylum seekers who have been stuck on the Maersk Etienne for a month due to Malta’s refusal to allow disembarkation have jumped overboard as the situation on board the tanker continues to escalate.

Prompt action by the crew ensured they could be rescued, and they are now being given due care. But Maersk Tankers argued that as the situation continues to escalate, the need for urgent humanitarian assistance became more evident.

The group of 27, which had fled Libya and its notorious detention camps, were rescued by the Etienne on 5 August. The Etienne had been directed to rescue the group by Malta, only to refuse it permission to disembark ever since.

Among others, the UNHCR, the International Organisation of Migration and a cross-party group of MEPs – including some from the Socialists and Democrats group the Labour Party is aligned to – have appealed to Malta to assume its responsibilities and end the standstill.

But on Sunday, Prime Minister Robert Abela defended Malta’s stance. In a somewhat questionable interpretation of maritime and international law, he insisted that Denmark should assume responsibility since the Etienne flies the Danish flag.

Watch: Abela ready to take decisions against Muscat if in the interest of the country 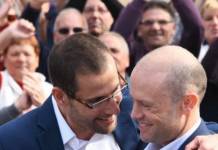