WasteServ announced it has reopened the civic amenity sites of Magħtab, Imrieħel and Ħal Far.

In a statement WasteServ said that after it had to take steps to immediately close all its civic amenity sites in Malta to protect the health and well being of the general public and its workers, now three of these sites have been reopened.

It reminded the general public that the use of face masks or visors before entering a Civic Amenity Site is a must. Also, a limited number of vehicles will be allowed to enter the sites at once. 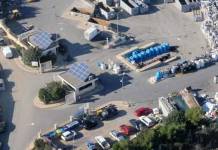