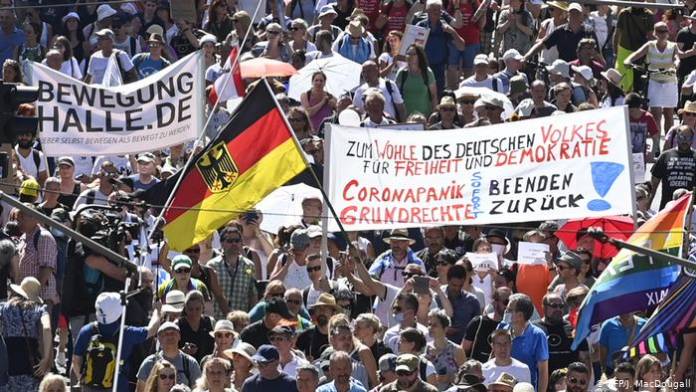 Thousands have converged in Berlin to protest against Germany’s coronavirus restrictions, arguing that these impinged on their rights and freedom.

The demonstrators appear to be a motley crew including libertarians, conspiracy theorists and anti-vaccine advocates. Members of Germany’s far right could also be seen carrying Germany’s pre-WW1 flag, which they often resort to flying in light of strict bans on Nazi-era imagery.

The protest was organised by entrepreneur Michael Ballweg, who is seeking to become mayor of Stuttgart and who had organised a similar demonstration in that city.

As one may expect, the group eschewed face masks and social distancing guidelines, leading the police to institute legal proceedings against Ballweg for failing to observe regulations.

The demonstration was met by criticism and contempt from many German politicians, with co-leader of the Social Democrats Saskia Esken going as far as describing them “Covidiots.” But Interior Minister Horst Seehofer, who hails from the right-wing Christian Social Union, struck a more conciliatory tone.

The German health authorities reported 955 cases of Covid-19 on Saturday, the highest daily figure reported since May.