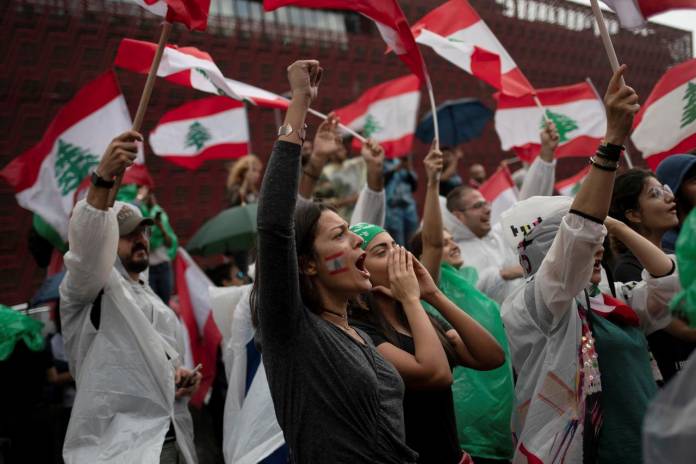 Thousands of protesters rallied outside Lebanon’s presidential palace on Sunday in a show of support for President Michel Aoun after protests calling for the ouster of the country’s elite that have toppled the government.

A huge convoy of cars, some waving Aoun’s orange Free Patriotic Movement party flags and his portrait snaked across a main highway on Sunday while a sea of protesters marched to Baabda palace.

It was the biggest counter protest to the massive wave of demonstrations that have gripped Lebanon since Oct. 17 and which have included Aoun’s removal among its demands.

“We’re here to say to Aoun that we love you and renew our trust in you,” said Hiyam Khair.

Wearing a shirt with Aoun’s face, George Barbar said he had driven from northern Lebanon to show his support: “If people don’t join hands with the president, there will be no Lebanon,” said Barbar.

A semblance of normality returned to Lebanon this week, with roads re-opening and banks opening to customers on Friday after being shut for two weeks, though restrictions were reported on foreign currency withdrawals and transfers abroad.

In a speech after Hariri’s resignation Aoun signalled support for a more technocratic government, saying ministers should be chosen “according to their competencies and expertise, not political loyalties”.

The protests have been less intense since Harris resigned, but demonstrators remain on the streets and a core demand is the rapid formation of a government led by technocrats to carry out the badly needed economic reforms.

The United Arab Emirates said on Sunday it was reviewing the possibility of an aid package and would inform Beirut of its assessment but did not yet have details of what it could entail.

Hariri said last month before the protests that the UAE had promised investments and financial aid to his deeply indebted country but that work remained to seal the deal.

Aoun is obliged to hold a formal period of consultations with members of parliament and designate the figure with the most support as the new prime minister who will be tasked with forming a government.