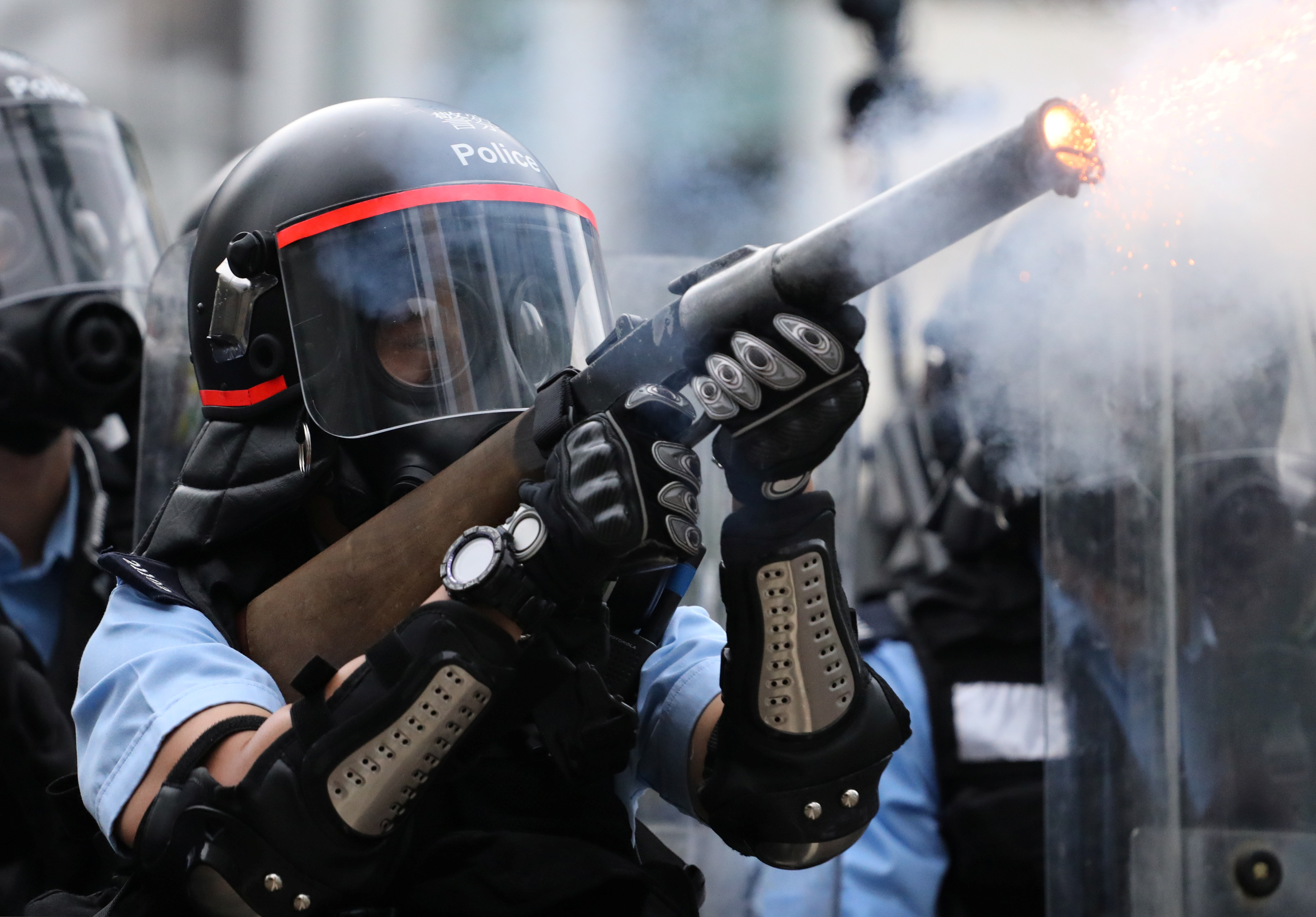 A few thousand protesters in Hong Kong on Thursday readied for potentially more clashes with police over a planned extradition law with mainland China, a day after police fired tear gas and rubber bullets at unarmed demonstrators.

Some protesters around Hong Kong’s legislature, the epicentre of the violence, rushed to stop police from removing supplies of face masks and food. School children joined the steadily growing crowd, which grew from around 20 protesters early on Thursday to a few thousand by midday.

Hong Kong authorities have shut government offices in the city’s financial district for the rest of the week after some of the worst violence in Hong Kong since Britain handed it back to Chinese rule in 1997.

Police fired rubber bullets, tear gas and pepper spray in a series of skirmishes on Wednesday to clear demonstrators from the city’s legislature. The Hong Kong Hospital Authority said 72 people had been hospitalised by 10 p.m. on Wednesday.

The extradition bill, which will cover Hong Kong residents and foreign and Chinese nationals living or travelling through the city, has sparked concerns it may threaten the rule of law that underpins Hong Kong’s international financial status.

Wednesday night was the third night of violence since a protest on Sunday drew what organisers said was more than a million people in the biggest street demonstration since the 1997 handover.

Overnight several thousand demonstrators remained near the legislature in the Admiralty district, while thousands more retreated to the Central business district, overlooked by the towers of some of Asia’s biggest firms and hotel chains, including HSBC and AIA.

Ken Lam, a protestor in his 20s who works in the city’s food and beverage industry, said he would remain on strike until the bill was scrapped.

“I don’t know what the plan for protesters is today, we will just go with the flow, but we think the turnout will be smaller than yesterday and it will be peaceful, after what happened yesterday,” he said.

Most roads around the central business district were opening for traffic on Thursday, but Pacific Place, a prime shopping mall next to the legislature, remained closed. Banks including Standard Chartered, Bank of China and DBS said they had suspended branch services in the area until further notice.

Banks based in the Central district – the financial heart of the city – emphasised it was ‘business as usual’ but many offered staff, where possible, the option of working from home.

“As a precaution, we shut two outlets early where the protests were taking place. Our priorities are the safety of our employees and supporting our customers,” said HSBC, whose ground-level public space at its headquarters has previously been a focal point for protests.

While acknowledging the controversy, Lam has refused to postpone or withdraw the bill, which she and her officials say is necessary to plug “loopholes” that are allowing the city to be a haven for criminals wanted on the mainland.

“We are not a haven for criminals, but we have become a haven of violent police. Firing at our children? None of the former chief executives dared to do that,” said legislator Fernando Cheung.

“But ‘mother Carrie Lam’ did it. What kind of mother is she, I have never seen such a evil hearted mother.”

The legislature remained closed with the council issuing a notice that the group’s meeting would not be held on Thursday.

“It is lawlessness that will hurt Hong Kong, not the proposed amendments to its fugitive law,” said the English-language China Daily.

Face masks, goggles, helmets and water bottles strewn around the legislature area were being cleaned up on Thursday, while a police team stood nearby looking relaxed.

Traffic was beginning to build up on the roads surrounding the legislature while the adjacent Admiralty metro station remained shut. Other stations were packed with commuters while others were being diverted and faced sprawling bus queues.

But concerns over the unrest saw Hong Kong’s Tourism Board call off its Dragon Boat Carnival this weekend and Index provider MSCI cancel a Thursday conference at the Shangri-La hotel near the epicentre of Wednesday’s skirmishes.

Amnesty International joined local rights groups in condemning the use of police force on Wednesday as excessive, while a spokeswoman for the U.N. Human Rights Office in Geneva said it was following the situation closely.

“We call on all parties to express their views peacefully and on Hong Kong’s authorities to engage in an inclusive and transparent dialogue over the draft legislation,” the spokeswoman said.

Diplomatic pressure was also building after leaders including British Prime Minister Theresa May and U.S. President Donald Trump commented on the protests.

The European Union said in a statement that it shared many of the concerns raised by citizens of Hong Kong regarding the proposed extradition reforms and called for an in depth inclusive public consultation to move forward.

“This is a sensitive issue, with potentially far-reaching consequences for Hong Kong and its people, for EU and foreign citizens, as well as for business confidence in Hong Kong.