Some 6,000 people are being kept on board an Italian cruise ship as tests are carried out on a passenger from Macau to see if she has coronavirus, a spokesman for the Costa Crociere cruise company said on Thursday.

The 54-year-old woman arrived with her partner in Italy on Jan. 25 and boarded the ship, the Costa Smeralda, in the port of Savona that same day.

She subsequently came down with a fever and flu-like symptoms, and both herself and her partner have been placed in an isolation unit about the ship, Costa Crociere said in a statement.

The liner has visited Marseilles in France, and the Spanish ports of Barcelona and Palma de Mallorca this week before docking on Thursday at Civitavecchia, north of Rome.

No one was being allowed off the ship while medical checks were carried out to see if the pair had the potentially deadly coronavirus, the company spokesman said.

He said it might take “a few hours” before the situation became clearer.

Prime Minister Giuseppe Conte said the government was ready to take further steps if necessary, but did not elaborate.

“We’re not concerned, but we are absolutely vigilant and cautious in facing this prospect,” he told reporters during a trip to Bulgaria.

On Thursday countries began isolating hundreds of citizens evacuated from the Chinese city of Wuhan to stop the spread of the coronavirus, which has killed 170 people. 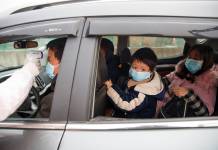