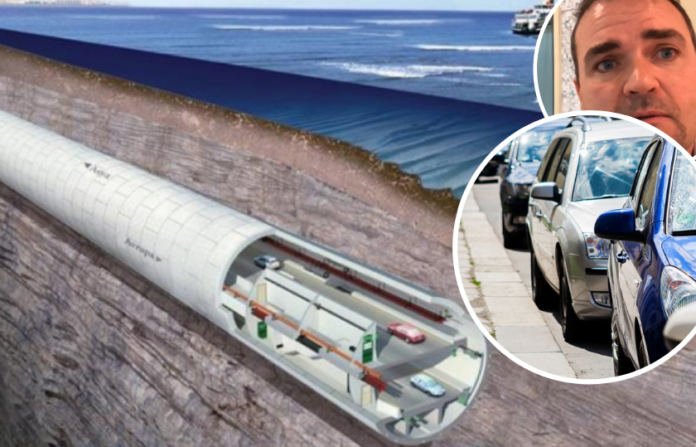 The Chairperson for the Steering Committee on the Tunnel between Malta and Gozo Mr Franco Mercieca said that those saying there will be a queue to get to the tunnel have no idea what they’re talking about.

Mercieca explained that although he tried to push for three lanes, it was found that it would not be ideal for safety reasons were the tunnel to be wider than 14 metres. The conceptual design is almost ready and there might be a need for further coring testing according to Mercieca. He explained that seismic investigations have so far shown no indication for alarm.

On the other hand, Infrastructure Malta CEO Frederick Azzopardi said that it is futile to have two lanes of traffic on either side because then the road would be wide for nothing.

What did Gozitans have to say about the Malta-Gozo tunnel?

Which stage is the project in?

Mercieca said that now they are at the tenders stage which he described as the most difficult. He said that after a contractor is chosen, the situation will be different.

What about a metro?

According to Azzopardi, although the current design is not taking a metro into consideration, in the future, those who apply for the tender can offer different solutions to what is currently planned.

He explained that for a metro to be viable “there needs to be the numbers”. He said that for now the numbers don’t exist and until there isn’t some form of Government subsidy, he doesn’t see the metro as viable for now.

Who will build the tunnel?

Watch: What are those wires in Maltese and Gozitan roads?

He explained that the first version of the Environmental Impact Assessment for the tunnel should be done by June. He said that the tender will be released before the EIA is finished, otherwise it wouldn’t make sense. This because the methodology wouldn’t have been finalised. He added that he hopes that work will start by the end of 2020.

In Azzopardi’s words, when looking at the requisites for the building of the tunnel, he doesn’t think it possible that someone in Malta can pass the process. “The requisites present aren’t so out of this world that nobody can apply, but neither are they such that everyone can,” he said.

Person hit by car in Qrendi

‘Its not who you know, but what you know’