The country’s first and primary challenge should be that of bringing to justice, the guilty and those that in any way participated in the assassination of journalist Daphne Caruana Galizia, the soonest possible, said President of Malta George Vella in his speech on Republic Day.

The President declared that “allegations of criminality and dubious connections have to be investigated in the most professional way possible, and those involved in this crime should be brought to justice without delay or favour”.

He warned that restoring Malta’s reputation overseas does not come by trying to forget what happened, but by showing genuine remorse and making sure that nothing of the sort will ever happen again.

In his address he also noted the effects of Covid-19 on Maltese society.

“This pandemic, which unfortunately is still hovering in our midst, disrupted our lifestyle and social norms, and negatively affected our economy”, he added.

He noted that such a collective experience will affect the collective mental well-being of all strata of the society. 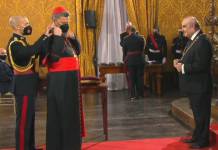 A balance is needed

On the environment the Head of State said that stricter safeguards are needed, so construction does not hamper the delicate balance that should be respected between the natural and the developed environment.

“I do fear we are close to losing this balance. In this regard, I reiterate my appeal to environment regulatory bodies, those responsible for the issuance of development permits and environment pressure groups, to insist on the strict abidance with regulations and place the national interest before that of the developer”, the President appealed.

“If we continue allowing excessive urban development to take place, we would be endangering our health and that of our children – especially our mental well-being”, continued Dr Vella.

No individual country can face this problem alone

President Vella appealed on the importance of solidarity, that he insisted should not be just a superficial concept when it comes to migration. He remarked that there should be cooperation amongst European Union states. He reminded that solidarity is one of EU’s foundation pillars.

In his conclusion the President appealed for a more empathetic society and caring with the more vulnerable in society.

He noted the importance of ensuring that more women make it to leadership roles and ascertain that no category in our society gets discriminated or gets side-lined while doing all we can to fight any form of prejudice.

“I strongly believe that we should do all we can to see that we actively remove and control the damage done by hate speech, especially on social media” , said the Maltese Head of State.

He noted the need for free journalism in a democratic society, while reminding that speculative journalism damages it. Same applies to politics, he affirmed.

“We have to realise that no matter how successful we become economically, if division takes root amongst us, we will become poorer and not richer. Peace will be strengthened further if we continue to promote it in our neighbourhood and beyond. It will be strengthened even more if we campaign actively against the proliferation of armaments. Against discrimination. Against racism. Against xenophobia. Against anything that is divisive” concluded the President of Malta.

Cedric Farrugia   January 26, 2021
Yesterday two priests were arrested for allegedly molesting an altar boy. The Police started investigating after a report was made by the Curia - Safeguarding Commission.