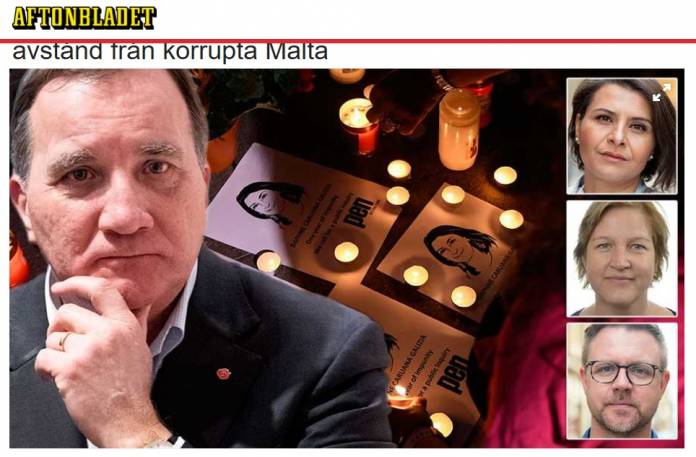 The Swedish news portal Aftonbladet has appealed to the Swedish PM to distance himself from the Maltese Labour Party and its Prime Minister. Aftonbladet titled its article “Löfven, do not protect the journalist killers” with a sub-headline which ran “Debaters: Put internal political interests aside and distance themselves from corrupt Malta”

The article pinned the issue of ‘widespread corruption’ firmly to the murder of Daphne Caruana Galizia. Aftonbladet said that, after the vote in the European Parliament, the socialist Swedish PM  should now find the courage to criticise fellow leftist Joseph Muscat: “But Sweden also has to condemn the events in Malta. We are now demanding that Stefan Löfven dare to criticise his Maltese sister party and reject the unimaginable rule of law that has emerged from the Socialist government in Malta” wrote Aftonbladet.

Describing Malta’s PM as a social Democrat, Aftonbladet said that Joseph Muscat, “has said he will leave office, but only in January. It has also been announced that the Maltese Parliament will be dissolved”. Aftonbladet said that it does not take a genius to realise that the two issues are linked to the murder investigations. “What has emerged is that the highest political city, several from Muscat’s closest staff and perhaps even himself, have direct links to the death of Caruana Galizia. The fact that this kind of legal violation takes place in a Member State of the EU in 2019 is terrible. Even more outrageous, however, is how the political links to the murder throughout the course have been swept under the carpet” wrote Aftonbladet.

The EU Council of Ministers, where member states meet, has, said the portal, remained silent. It said that the Socialist group in the European Parliament has adamantly “tried to stop everything that has happened in the wake of the assassination. They have tried to stop both condemnations of what has happened and to stop the delegation of the European Parliament from travelling to investigate further”. Aftonbladet said that this is not just an issue of ‘loose rumours’ as some Socialists tried to paint it  “Because even if Mr Muscat resigns, the suspicion of corruption is just as widespread among his party friends” wrote the portal. “The rule of law must be respected, no matter where it is broken,” said Aftonbladet referring also to Poland and Hungary.

“We are now demanding that Sweden act. Stefan Löfven must put aside his internal political interests and clearly distance itself from the shocking developments in corrupt Malta, and also from the shockingly silent behaviour of the Council of Ministers and the European Parliament.

“This isn’t a game. The legitimacy of the EU is in real danger if it does not act forcefully against a government suspected of having links to murder and where the rule of law risks being put on waivers. Europe cannot settle for the chest of values and then hide when our foundations are shaken” concluded Aftonbladet.

(Google translate was used to render the Swedish to English)