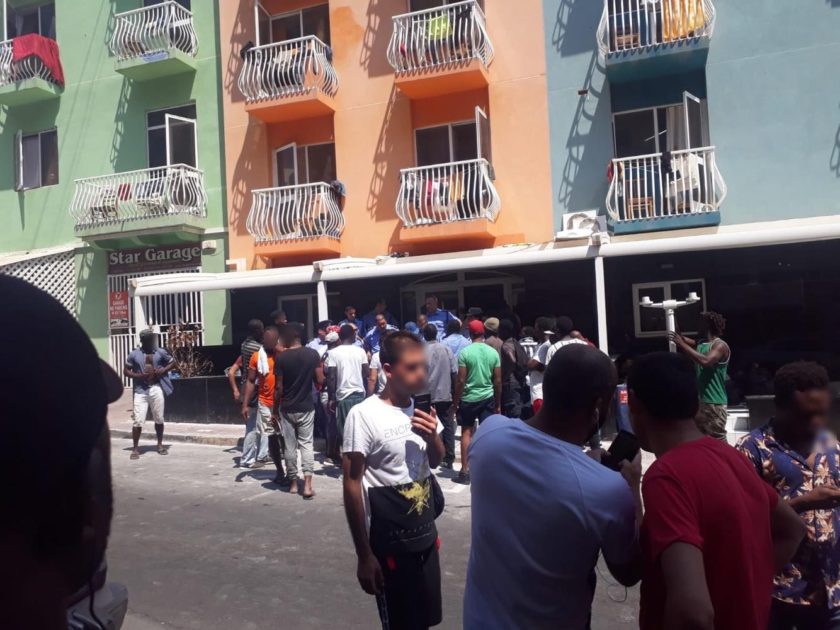 Paloma Hotel residents have not been evicted as a Court has provisionally upheld a warrant of a prohibitory injunction preventing the closure of the Paloma Hotel. Edward Gatt appeared as legal counsel for Christopher Drago, who is representing the building’s owner.

The building previously used to serve as a Russian Boarding School. It was later converted into apartments to be rented out to immigrants seeking housing.

A spokesperson for the Ministry for Health stated that the Health Directorate acted on several reports it had received regarding the Paloma Hotel. She went on to say that notices affixed to a property regarding public health emergencies are issued in terms of the Public Health Act, in cases where a public health risk is identified.

The Mayor of St. Paul’s Bay, Alfred Grima, shared a news article covering the raid, stating: “pressure paying off; well done”. While speaking to inewsmalta.com, Grima explained that after becoming Mayor, he received a number of complaints about the post. It was reported that Grima stated that he himself had gone to the Paloma Hotel to view the rubbish being left outside the Paloma Hotel. It was after seeing the large amounts of rubbish that he concluded that there were a large number of people living in the building.

Newsbook.com.mt had asked the Ministry for Health to clarify the avenues for redress for the people living in the building that had been declared a health risk. The spokesperson stated that the public health emergency notice is only lifted once the Health Authority declares that there is no longer a public health risk. When asked whether the State has a duty to find alternative accommodation for persons evicted on the basis of sanitation laws, the spokesperson stated that it is the people’s responsibility to find alternative accommodation, and not the State’s.

“They didn’t knock; they just broke in ” – residents

Read: 80 immigrants evicted out of apartments in Buġibba

Residents at the Paloma Hotel told Newsbook.com.mt that the police did not knock, but rather broke in to conduct the raid at dawn. According to the Criminal Code, the police can only break in without a warrant only if there is reasonable suspicion that an offence is being committed, or about to be committed. This is only after having knocked on the door and asking for entry prior to the breaking in.

After being asked by Newsbook.com.mt on the number of people being evicted due to similar situations, the police stated that they cannot evict people from their houses. The newsroom also asked for the reasons behind police raiding the Paloma Hotel, but the question has remained unanswered up to the time of publishing.

“This could be considered a populist and racist action”

The Aditus Foundation, a human rights NGO, told Newsbook.com.mt that immigrants supposedly living in terrible conditions have once again been treated like they’d committed a crime. Assistant director for aditus, Carla Camilleri, who is a qualified lawyer, stated that if the raid was due to sanitary concerns, the owner who was renting out the apartments should suffer the consequences, rather than the residents. She went on to say that a 6am raid to check health and safety regulations, at a time when people are still asleep, could be considered to be an excessive and disproportionate measure.

The lawyer explained that the way in which the authorities pick and choose who is deemed to be a criminal, in terms of the actions being taken, could be considered populist and racist. She went on to say that these types of actions solve nothing, and only mean that the homeless community may continue to grow.

Persons outside the European Union who are permitted to reside in Malta, and persons who are issued international protection by other Member States, may remain in Malta for 90 days. These persons do not have the right to remain in Malta permanently, or to legally work in Malta.

If a person does not return immediately, a return decision may be issued by the authorities against that person. Of course, it is important to note that in issuing such decisions, the authorities need to comply with basic procedural guarantees, such as giving a reasoned decision in writing, providing clear information, granting the right of appeal and whilst applying safeguards for specific situations relating to vulnerable persons, minors and family unity. In implementing these procedures, the authorities are also required to abide by the provisions contained in the Charter of Fundamental Rights of the European Union, such as the right to human dignity and equality, right to privacy and to procedural fairness.

Newsbook.com.mt also spoke to the Jesuit Refugee Service’s (JRS) Director, Katrine Camilleri, who is a qualified lawyer. She stated that such evictions “shine a bright light on an often hidden reality in Malta” – that of many people, some of them migrants, who are forced to live in miserable conditions because they cannot afford dignified accommodation, despite working.

She stated that access to adequate housing, that is, housing that is safe, secure, habitable and affordable, is a basic right. She went on to say that it is the government’s duty to ensure that everyone can enjoy this right. The lawyer then said that eviction due to squalid and unsanitary conditions is nowhere near enough to fulfill the state’s duty to work to guarantee access to adequate housing.

The JRS Director added that the State should take pro-active measures to address the current housing crisis. Possible steps, according to her, could include: regulating the rental market in order to ensure that the rights of tenants are adequately protected and that landlords cannot charge exorbitant rents or change the rent arbitrarily, and putting in place social housing options for the most vulnerable, according to pre-set criteria. She also stated that it is essential to ensure that all workers receive a salary that allows them to live with dignity.

Katrine Camilleri then commented on the raid itself, stating that according to accounts in the media, the way in which the operation was conducted raises a number of questions,  particularly the accounts of migrants being rudely awakened by officers bursting violently into their rooms and shouting at them. She added that while the authorities have a right and a duty to ensure that laws are observed, they are obliged to do this in a way that respects the rights and dignity of all involved. Camilleri stressed that the people living in that hotel committed no crime; they were just too poor to afford decent accommodation. She went on to say that in the circumstances, they should not only be treated with respect, but also assisted and supported to ensure that they do not end up homeless and destitute.

Katrine Camilleri went on to say that from what she read in the media, the operation appears to have been concerned with sanitation and immigration laws. Due to this, she stated that it must have been clear from the outset that the operation was going to impact a large number of people already living very precarious conditions. She asked whether the social welfare agencies should also have been involved both in terms of planning as well as in terms of implementation and follow-up. Camilleri said that the state may not have a duty to provide alternative accommodation, but surely it has a duty of care, particularly towards the poorest and most vulnerable.

The JRS Director stressed that there is something “fundamentally wrong” with the procedure of such raids, as they clear buildings that are supposedly not fit for human habitation, but leave people living on the streets and more vulnerable than ever to exploitation and abuse. She went on to say that if the authorities want to clear the building, people should not be evicted without notice; as a “basic minimum”, she said that they need to be given time within which to make alternative arrangements.