When you speak to Regina Catrambone, you immediately get a feel of her vibrancy and her indomitable will to see a project through. She speaks with a passion born out of conviction and welded together by the Catholic values. In this interview, Regina Catrambone speaks of the right to happiness and to a decent life, of putting your money where your mouth is and of not judging out of the comfort of a well-padded armchair. What the migrants are going through today is a replica of the Holocaust, said the philanthropist.

How can you call yourself a Catholic and let people drown?

Over the past four years, Regina Catrambone and MOAS (Migrant Offshore Aid Station) were responsible for saving over 40,000 persons from drowning. MOAS operates on a search and rescue platform and has now extended its operations further afield into the Bay of Bengal which, like the Mediterranean sees huge traffic of persons in search of a better life. Catrambone described that MOAS was born after the Lampedusa tragedy when over 360 persons had drowned. On that sad occasion, Pope Francis had visited the Italian island and had spoken about the globalisation of indifference. Catrambone said that at that point, they had been holidaying on a boat and she and her husband decided that they needed to do something to follow up on the words of the Pope for “how can you be a catholic and sit by and let people drown?” asked Catrambone, adding that the North Mediterranean littoral is all Catholic or Greek Orthodox. Catrambone pointed out to the irony that Bangladesh, an area where MOAS is heavily involved in, received over one million refugees and the wealth of Bangladesh is nowhere near comparable to the wealth of EU countries such as Spain, France, Italy, Greece and Malta. “I just want to stress that when Bangladesh which is quite a poor country, received over one million people, they did not close their borders. So sometimes when for some thousand people we feel that there is an ‘invasion’ I feel it is rather silly,” said Catrambone.

‘Nobody deserves to die at sea’

The MOAS motto has been ‘Nobody deserves to die at sea’ said Catrambone and, while the mission of the NGO is one of search and rescue, she said that this is not the solution to the migration problem. Catrambone express regret at the inertia displayed by the EU in trying to find solution and safe pathways for people fleeing unbearable circumstances. “The solution will be to implement safe and legal routes, safe and legal pathways so that people do not take the routes of the sea at all. For that we started our campaign ‘Safe and Legal Routes’” said Catrambone.

MOAS expanded its operations since its inception in 2013 and now operates not only naval assets but also drones and planes. However, Catrambone said that “if through our visual, our pictures, the people will be captured by the Libyan coastguard and they will be taken back to Libya, we will become, as NGO, part of an indirect push back.” At that point MOAS took a step back to see what the direction of Europe was going to be. Two and a half years later, said Catrambone, MOAS was still waiting and working only on border control. “It should not be an NGO who is rescuing them, it should be the European Union,” said Catrambone emphatically.

But is MOAS helping human traffickers?

Referring to frequent insults thrown on Facebook at humanitarian NGOs that they are human trafficker or assisting human trafficking, Newsbook Q&A asked MOAS bluntly if it was assisting human trafficking. Catrambone said that when people are dying at sea, it is not up to us to judge. She said that a person deserves rescue whether that person is a victim or a criminal. It is then up to the justice system to take over an process a person if that person is a criminal, added Catrambone. She said that people who make such judgements are normally looking from the outside and would not have a handle on the real situation. She added that the migrants have many faces, men, women, children “They are looking for their future, they are looking for the pursuit of their happiness and there is nothing bad to being happy – Not only people born of a certain colour deserve to be happy. Happiness has no border. There needs to be the freedom to dream,” added Catrambone.

Criminals take over where there is a vacuum

In her criticism at the inertia and complacency of the European Union, Catrambone said that where the management of situations is weak, criminals will take over. She added that the issue of migration is no exception, stressing that the smugglers are much quicker to react than the European Union. “In the meantime, people will die,” said Catrambone.

Read Also
These are the ‘numbers’ we left to die

The eyes have it

“I remember many eyes and many hands,” said Catrambone when asked if there were any particular stories of migrants she had encountered. One young boy, she recalled, had been travelling with his mother who was raped next to him. She said that the mother thought that the child had not realised what had happened. Later, when they were speaking to the child, said Catrambone, they asked him what he wanted to be when he grew up. ‘I want to be a superhero so I can protect my mum’ came the reply. Catrambone said that at that point they had realised that the child had been wholly aware that something had been going on. When they spoke to the mother, they realised that she had indeed been raped several times with children next to her.

She recalled also a Syrian couple with a one-week-old baby. Both parents had been lawyers in Syria and had been used to a good standard of living before the civil war took everything from them. Catrambone said that they had tried delaying their departure from Syria for as long as possible but finally they to leave. “It was one of the worst rescues” recalled Catrambone as the boat was packed and they needed to find safety somewhere else.

“These are just people just like us and they cannot get lost in the narrative of ‘the migrants’ or ‘illegals’ which is inhumane,” pleaded Catrambone. She said that if this is their only option, then they must indeed be desperate. “I dare the people who open their mouth and talk while sitting on their couch and drinking and eating and continuing to give this hate speech through the social media, really think if they were in the migrant’s shoes how their perspective will change,” said Catrambone. If we are born on this side of the world and have what we need then it is our duty to help those who have less than us, said the philanthropist.

A frequent criticism is that the migrants should never have left Libya. This is a complex situation because, as Catrambone so elegantly put it, with the different nationalities, there is a ‘bouquet’ of situations. However, she homed in on the situation in Libya. The Libyan nationals, she reminded Newsbook Q&A, have full refugee status since their country is deemed unsafe. “So, why is it unsafe for Libyans and safe for migrants?” asked Catrambone, “Why do the Libyans not go to their country to fix it? If it safe it is safe…safety has no nationality.” She said that the narrative in the media is bolstered by ‘a lot of fake news’ intended to strengthen the hate speech and racist approaches. She compared the plight of the migrants today to what the Jews went through in the Holocaust. Then, she said, the Jews were dehumanised, recognisable only by their number. Migrants today, added Catrambone, are going down the same inhuman path “But these people are not numbers…They want to contribute to society, but integration is never one way. It is up to us,” concluded Catrambone. 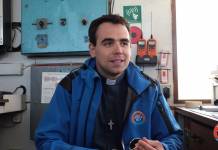 Watch: Happiness is not a question of skin colour

John Paul Cordina   January 26, 2021
Malta will be spending €2 million to acquire 80,000 doses of Moderna’s Covid-19 vaccine, over and above the vaccines being distributed through the agreement the pharmaceutical company reached with the European Commission.