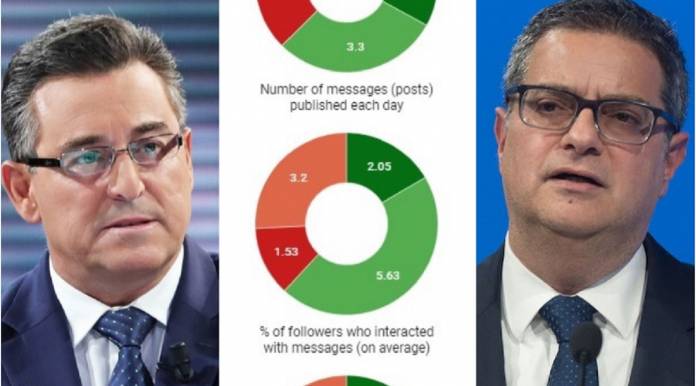 ” Although social media likes and following does not directly translate into votes when numbers are large, these are highly indicative of how citizens are reacting the politicians’ messages,” observed Dr Curmi. The data was collected on Saturday 12th September from public social media activity between Saturday 5th September and Friday 11th September both included.

Overall there has not been much change from what was observed in previous weeks and both candidates continued in the same direction.

So how do the two contenders compare this week?

“What is similar to all candidates is the number of people that share each post. It seems that there are a number of ‘followers’ who consistently share every message that their preferred candidate posts. One would need to see how these messages propagate beyond this ‘consistent’ group to the larger population. In other words, how much does the message resonate with the wider population if these ‘consistent sharers’ are deducted?” asked Dr Curmi.

How does this relate to Labour politicians?

The temptation is always present to compare with PL politicians but, as Dr Curmi warned, that might be tricky. “When doing such a comparison, one needs to take into account a number of factors.  Unlike PL candidates, PN candidates are in a leadership race so supporters are expected to be more reactive to messages at this point in time. To compare like with like we can look at MPs personal social media pages. However, MPs in government would have exposure across various other pages and these are not included in this observation.

“In this light, if we compare the Facebook messages of the PN leadership contenders and the PL leader and deputy leader * we can observe which messages people were most reactive to,” said Dr Curmi. The table below ranks the messages published by Robert Abela, Adrian Delia, Chris Fearne and Bernard Grech ranked by the number of people that reacted to them (messages receiving most support first).

Social media platforms have become essential tools for politicians to communicate with the wider population and engage with citizens. In many cases these platforms reach out to the largest segment of the voters nationally more than any other platform such as traditional television or posted letters. Understandably, it can be argued that social media engagement does not translate to votes or ‘tesserati’. However, data from social media is most often well in line with other data sources such as well sampled surveys especially when numbers are large, and trends are consistent.

*PN Deputy leaders were not included in the list as there has not been any post in the time period.