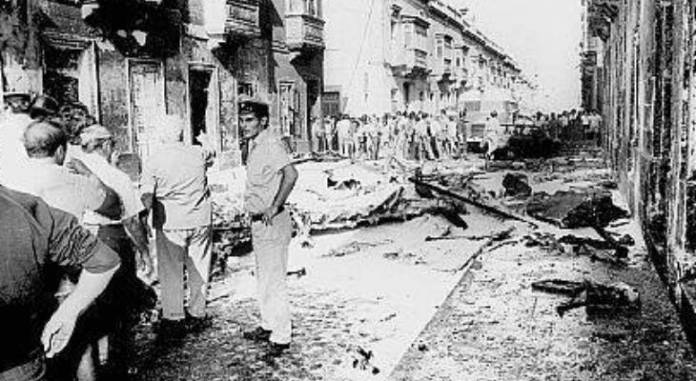 “It was a miracle, nothing less”

“I thought that it was the war all over”

“It sounded like a gas explosion right next door”

As a child of 11 years, these were feelings being expressed around me by the grown ups on the days that followed the crash of the Vulcan Bomber on Zabbar, 45 years ago today. I lived it and remember it with such clarity I can almost close my eyes and recapture the feelings of yesteryear.

I was excited, my Confirmation was drawing near and my mother and grandmother were going to Valletta to buy my dress. Life was simple then. They chose the dress as they chose most things for me until I was deemed old enough to know my mind. They were considerate to my tastes too, though, in many things. Earlier that week, I had been given permission to have a goldfish in a bowl. A mighty aspiration, accomplished. Whatever the dress looked like I was not about to complain – I had a fish! I was curious though, so I was eager to get home from school.

At one in the afternoon, we boarded Michael’s bus, a rickety thing, but we all loved Michael, round and jovial as he was. From St Joseph’s School in Paola to home in Zabbar the journey usually took around 30min as we dropped off other children in Senglea and Vittoriosa. As we approached the twin gates of Senglea, a collective ‘UUUUU’ went up from the children in the bus and all rushed to the right hand side to watch a huge, dense black pall of smoke hanging over a built up area. As Michael stopped the car, one of the mothers who came for the children said that a plane had fallen. My eyes must have been as round as my goldfish bowl. I was in my Biggles phase so in my mind an aeroplane was either a passenger carrier or still fossilised in WWII.

“Well, at least it’s not Zabbar,” I muttered, full of non-compassionate relief, motivated as I was by my wish for the preservation of my goldfish.

“That has to be Zabbar,” retorted the mother as she herded her brood, today an assortment of distinguished medics, into safety.

I froze. Through my mind raced pictures of dead goldfish, dead parents, destroyed home. I looked at my brother, six years my junior and just starting infant school, also on the bus. Would I have to care for him, as I had read children did in The Missions?

It took Michael 3 hours to get from Senglea to Zabbar, inching along the normally deserted roads until I finally was within visual distance of my home: it was standing and, ah, there was my mother standing anxiously on the porch. I was home.

We set out early in the morning, my mother and I, off to Valletta to the ‘Indians’. In those days, the shops owned by the Indian Community in Malta had the best materials and my daughter always loved fine things, a romantic like her father. So I wanted to choose something special but serviceable for her Confirmation. We went to all the shops we had on the list but finally settled on some fine Berwick tweed. Soft. She won’t complain it was prickly, I smiled mentally. She could be obstinate in that.

“Let’s get a Baba from Blackley,” said my mother as we headed home. But at Blackley’s we were told that the next Baba batch would be in 30 minutes and that meant we would miss the bus home. So, Baba-less we headed home. As we arrived at my home, near the parish Church, first stop, I asked my mother if she wanted to come in for a cup of tea. She preferred to head back to her own home however, about 10 minutes away. I went in and made myself a cuppa, standing near the balcony overlooking the large swathe of fields that still boarders Labour Road.

Then I heard an explosion, and another one. They still have left-over fireworks from the festa, I thought. Then I saw three women, visibly overexcited, clutching their hair and pointing frantically. I felt a stab in my guts. Was that a gas-leak explosion? What if my mother had left the gas open and was now dead?

“It fell. It fell. I saw it”, said Mrs Grech, a well-known and respected figure in the local community. What had? An aeroplane came the answer.

I all but ran to my mother’s house where I found her, dumbstruck. She gave me her story.

My eyes were filled with tears as I recalled the ball of fire which had sped across the sky. I was speaking to Fransa when it happened, a couple of meters away from my door. Fransa was a good woman and not prone to loitering so I knew that a couple of words would not take forever. I was looking down the whole street, right up to where my street met with Main Street. Then I saw it. A ball of fire, oozing smoke and littering what looked like paper confetti as it seared the sky.

It’s the war again, I thought, irrationally. But then, what has reason got to do with balls of fire in the sky?

Banging on the door. Doris. Ah yes. Some help.

The air was balmy, the sky sharply clear as it usually is on a Majjistrall. Joe and I were strolling Upper Barrakka Gardens as we usually did on break. We loved to see the ships in the Harbour and the beautiful panorama of the three cities.

An “Ooohhhhh!” went up from those on the Barrakka balcony. We looked up at the sky just in time to see a huge delta shaped plane in flames. It looked military but I preferred the romantic bi-planes of  World War 1, truth be told.

“It must be part of a film at the Malta Film Facilities,” I whispered to Joe. So realistic these stunts I thought. Oh look, there is even a man parachuting. Hold on. Wow! The parachute has caught fire. How dramatic! Films these days. So vivid. And a pall of fire and smoke engulfed part of the three cities.

Slowly, my eyes filled with the pictures of the film I had just seen being rolled out before me, we headed back to Beltissebh.

“Ma, Ma, let’s go to Granny, pleassseeee!” I would not take no for an answer. I knew that going to Granny would then lead to going to see what had actually happened. In the meantime, ambulances, fire engines, army vehicles both Maltese and British milled around below our house. We were at the hub of things.

Finally, my mother gave in and we went down to Granny’s and all three then off to Sanctuary Street which, by now we knew to be the centre of activity. As we approached Sanctuary Street, near St Patrick’s Football Club, I saw Granny clutch Mama.

“What? What?” I asked impatiently.

“Her hair. All white,”  said my mother quietly. Till this day I do not know if Giorgia’s hair had turned white with fright or with dust but she looked like a haunted woman.

As we walked slowly, jostled by a dozen backs and shoulders, I felt more than heard, the broken glass crunching beneath my feet as the walls of the streetscape changed from the multihued traditional effect into dirty grey and darker shades. From my disadvantaged viewpoint, I was never very tall, I still could see the blackness that dominated the middle of Sanctuary street.

And the smell. Acrid, dizzying, throat-burning. There seemed no escaping it. As there was no escaping the name that was buzzing around like a persistent bee: Bice.

I knew Bice. Sweet old lady. At that age anything over 40 was old. I used to buy crochet hooks and yarn from her shop in the corner. Something had happened to her.

“Look, Guzeppi taz-Zija Manann,” I said, my sharp young eyes spotting this relative, a member of the society of M.U.S.E.U.M. Guzeppi saw Granny and Mummy. He said that the front of his house and the door had been burnt to a crisp. But, he said, at least Our Lady of Graces had spared the school. He said that a large section of the plan had fallen in the school yard. Thankfully the children had been home. In those days, children in state schools had a 90min break and they used to go home for lunch.

As the day wore on, the full horror of the event unfolded. I pieced together the information garnered from the chats my mother had with the Zabbarin she knew. The plane, a Vulcan Bomber had developed a fault and realising that the plane was in serious trouble, the pilot had tried to head it out to sea so that the crew could bail out and ditch the plane into the sea. But they did not manage and died in the air, one of them managing to eject only to have his parachute catch on fire. Bice had closed the shop late and had gone to get her customary loaf when part of the plane fell in Sanctuary street, engulfing her and the surrounding homes in flames.

A week later, the whole village turned up for a thanksgiving pilgrimage. For such a huge tragedy which could have wiped out a whole village, very few had died.

And I got to ditch my homework. Perhaps this can also be considered as my first journalistic experience.