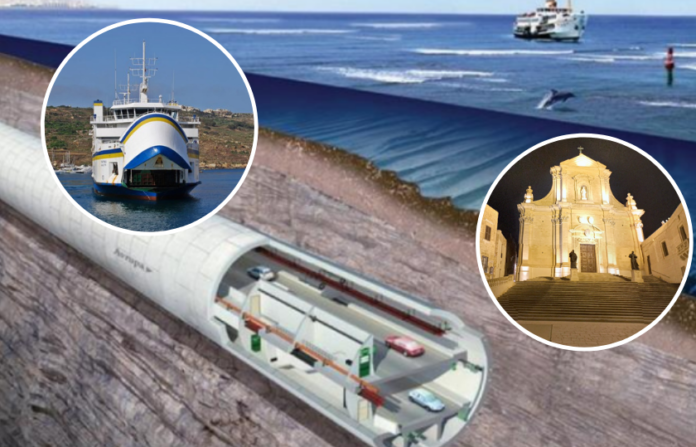 A report written on the proposed Malta – Gozo tunnel finds that while tunnel may mean a better quality of life for the population on Gozo, others said it could increase the cost of living.

The Social Impact Assessment was carried out in 2016 under the requirement of Transport Malta to understand what most people think about the proposed tunnel between Malta and Gozo. Newsbook.com.mt obtained a copy of the report through a Freedom of Information Request.

It was found that although a number of Gozitan residents looked positively on the tunnel between Malta and Gozo, it could lead to an increase in people staying in Gozo and knock on economic benefits. Others also mentioned negative impacts which could occur. These included:

Increase in cost of living

Increasing the number of bars and clubs

Increase in price of rent

The researcher noted that many of those people interviewed said that these risks were already developing and action by the government can be avoided.

It was also argued that the proposed tunnel leads to an increase in the number of residents over the weekend. This should have both positive and negative impacts on island life today.

How to change the Gozo entertainment?

The social impact assessment also found that tunnel will lead to an increase in entertainment establishments. While this leads to more variety, this can also have its downsides. The study pointed out that there could be a lot more noise impacting public places and local accommodation, coming from revellers leaving bars that are closing or during the Festival period. The report also mentions noise from people using skateboards.

The report also raised concerns about the increase in waste on sidewalks and less places to go because of increased restaurant tables on public land.

The report concluded that a tunnel between the two islands has the potential to reduce the number of drains, including the brain drain, drain Demographic, Economic drain, drain and Wellbeing.

The report’s findings aren’t all bad and does list some positive impacts:

Reduction in the time one needs to cross the channel

From social impacts analysis showed 15% were classified as negative, 53% were considered positive, 38% were neither positive nor negative, and 7% had Undecided result. The negative impacts were also classified as positive at the same time.

The methods used were correct?

Professor of Statistics Liberato Camilleri spoke with Newsbook.com.mt about the methods used in the social impact assessment.

Asked whether residents and Gozitan students are considered as experts, Prof. Camilleri said that it is difficult to answer this question. He said to always assume that the researcher has made best endeavors to select a representative a sample, regardless of the opinion of the participants. Explain that the only way they can show a sample yielded a poor representation of the population is through an independent study and then comparing the results between them.

He also explained that convenience sampling is when participants selected from that part of the population which is easily accessible by the researcher. “Basically, this means that only those experts who were willing to participate in the interviews were included in a sample.”

In the words of Professor, the use of convenience and purposeful sampling to select experts is an adequate method.

On the questionnaire Prof. Camilleri said that undoubtedly the best method for selecting the participants are through random sampling. However, this method works, he explained that most research methods use a stratified sampling where the number of participants selected from each locality in proportionate to the population of that locality.