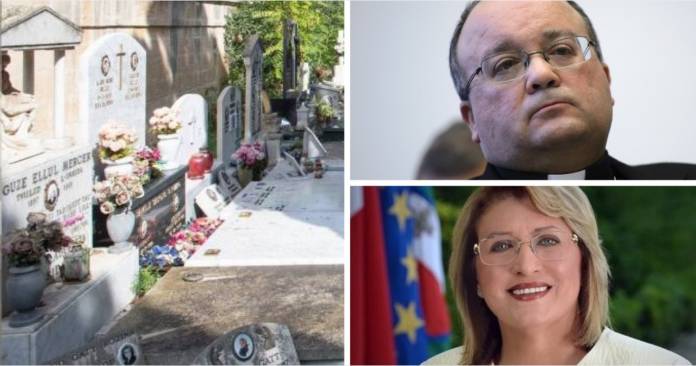 “An appropriate and historic moment” was the way President Emeritus Marie Louise Coleiro Preca described Archbishop Scicluna’s blessing of part of the Addolorata Cemetery on All Souls Day. Archbishop Scicluna blessed that area in the cemetery which had formerly been known as ‘Il-Miżbla’ (The Dumping Ground), an unconsecrated patch of land which was reserved for persons thought to have died out of God’s grace. In the politico-religious strife in pre-Independence Malta, a number of Labour stalwarts, not more than seven, were buried there.

The celebration on All Souls was led by Archbishop Scicluna in the cemetery church and then blessed the tombs in that area. Archbishop Scicluna went a step further than his predecessors who had removed the boundary wall surrounding these graves and had also asked for forgiveness various times.

The time for reconciliation has come

President Coleiro Preca thanked the Archbishop, adding that the time for reconciliation had finally happened. Coleiro Preca’s words were in harmony with what the Prime Minister said on Sunday when he described the act of the Archbishop as one showing courage. Coleiro Preca said that the news had filled her with joy, having experienced at first hand the anguish of those whose relatives had been buried in unconsecrated ground. “There was a woman, a good woman, who was run over by a car as she was leaving the church. She too was buried in ‘Il-Miżbla’” said Coleiro Preca. She added that this seeming distinction between dead persons was a social injustice.

Coleiro Preca thanked the Archbishop for asking for forgiveness, adding that the time for reconciliation had arrived. She added that the Church should now call upon the families of those buried in ‘Il-Miżbla’ so that they too would benefit from the healing process and feel that the arms of the Church are open to them as well.

A stain on the whole of Europe

Turning to the burning issue of immigration, Coleiro Preca said that the few buried in Addolorata are just the tip of the iceberg. The true massive burial ground said Coleiro Preca is the Mediterranean Sea. “My heart aches for the mothers and fathers of these nameless dead; we truly should be chastened,” she said, adding that the issue of immigration is a stain on the whole of Europe. These people, said Coleiro Preca, were seeking refuge from conflict. The Maltese had done the same when the economic situation in Malta had been dire. She reflected on the Calvary which Maltese settlers in Australia had faced. They had been called ‘dagos’ and left in a ship out of the harbour because of their swarthy skin. She concluded that the Maltese cannot just be interested in the here and now but must learn to treat humans with decency.