The Kamra tal-Periti expressed its concern at the fact that Malta is in the midst of a deep political crisis. It observed that “Several of those allegedly implicated, even if just by association, in precipitating the current situation have sworn an oath of allegiance to the Republic of Malta and its Constitution, and to perform their duties to the best of their knowledge and ability”.

Recalling its previous statement where it had enjoyed its members to, among other things, uphold ethical behaviour, it called on all professional chambers and association to uphold their duty to investigate professional misconduct and hold their members to account without fear or favour.

The Kamra tal-Periti recalled that it has consistently spoken out on the need for reform. “The time for dishonest masks pretending that all is in order is now over. It is now time for those in authority to recognise the precipitous situation that has led to the current social unrest, and to urgently take all necessary decisions to safeguard the national interest” concluded the KTP. 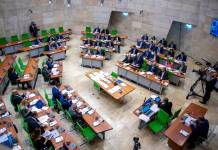 Equality before the law not for those close to PM – Delia

Reuters   January 23, 2020
The prime minister's office gave no detailed reason for the cancellation of the trip but said Conte would be remaining in Rome to work on "urgent issues".

Christoph Schwaiger   January 22, 2020
A proposal which will see Valletta shops remain open till 10pm every Friday is being considered, according the Valletta Mayor Alfred Zammit.