If you are lucky enough to be at the right place in the right time, bird migration can be a spectacle to behold; and Malta is such a place. Late summer through to autumn is the right time, so keep your eyes peeled.

At this time of the year, birds would have ended their breeding attempts in their European breeding grounds and have started some of the most impressive voyages in the animal kingdom, to their wintering quarters in Africa. Some species venture well beyond the Sahara Desert to remote areas where food would be more plentiful even in our winter.  This journey is full of perils, including predators, natural obstacles such as deserts or mountains or man-made obstacles (such as tall buildings and wind farms), hunting, weather, scarce food sources, pesticides and arduous sea crossings.

The latter is an important factor that dictates the routes used by many bird species.  In order to mitigate this, such species tend to favour the shorter sea crossings that in the European context are across the Straits of Gibraltar (Spain to Morocco), the Straits of the Bosphorus (Turkey) and the central Mediterranean. Even though the latter is the lesser of the three migration routes, millions of birds still use it year after year.  Malta is in this route and therefore is fortunate to enjoy the bird migration spectacle and the excitement it brings with it! But in order to find birds, some basic knowledge comes in handy to find the best watch points and the best observation time for a particular set of species.

Mostly based on their wing morphology (shape of wing), birds have different migration strategies.  Those with long and broad wings, such as birds of prey and storks, migrate during the day as they use the rising hot air currents in thermals so that they gain height with minimal effort.  When they do this, they fly in circles on outstretched stiff wings and without flapping, they gain height and even disappear into the clouds. When they reach the appropriate altitude, they then start to glide out to sea heading for the African coast, more than 200 km away.  However, when it gets past mid-afternoon, or when the atmospheric conditions are not favourable (storms or adverse wind) many birds of prey opt to spend the night in Malta.

This is when places like Buskett become very busy with birds such as Honey-buzzards which stoop down to find an appropriate roost.  At this stage, the birds are very vulnerable, and hence the reason for stooping at high speed straight into the tree canopy to avoid predation.

On the other hand, many other species migrate on a broad front particularly at night, when temperatures are cooler and when predators are fewer and far between. These include ducks and most passerines (perching birds) and they navigate by using the stars and moon.  In favourable weather conditions, the vast majority of these birds overshoot Malta and continue their migration to the African coast in one hop. However, when the birds encounter bad weather on their way, they are forced to find land, as they cannot navigate well and to escape storms and rain. This is when we can see many birds reaching our shores, especially in early morning.

Armed with such knowledge, we are better prepared to know when and where particular species are most likely to be seen.  For example, birds of prey are mostly seen in the afternoon soaring in thermals or early to mid- morning when leaving their roosts before migrating. The early morning is also best for those species that migrate at night as many times they are just arriving at that time or are active to feed after arriving during the night.  In particular, when there are storms with light rain during the night, it is highly likely to find “grounded” migrants, sometimes in large numbers in wooded areas but also in open countryside, depending on the species.

As discussed already, some birds soar on thermals to save energy in their flight. Another flight method used by some of the larger birds is that of formation flying.  Sometimes this is in the shape of a ‘V’ or a line.  When using such a formation the lead bird, which is one of the strongest in the flock, creates a wave of air and those birds following it ride on this wave to save as much as 30% of the effort.  When the lead bird starts to get tired, it is replaced by another fit and strong bird that takes the lead. The lead birds are adult birds that have migrated on other occasions and hence have experience and know the way to the wintering quarters.

Birds have fascinated us for many generations, and numerous studies have been carried out. In fact scientific studies are ongoing throughout the year by BirdLife Malta. This is through observation of bird behaviour but also through bird ringing. In this latter process, small metal rings are put on the birds’ legs with a unique number and biometric information is recorded.  Through collaboration with similar schemes in other countries, the movement of birds can be followed from their breeding sites, along their migration to their wintering areas.

Recently with the advance of technology, this process has been augmented with the placing of small electronic tracking devices. Depending on the species, these devices can provide a wealth of information that otherwise is impossible to record, such as depth and temperature in the case of diving birds like shearwaters.

There is another facet of bird ringing; that of using coloured plastic rings on relatively large birds.  At BirdLife Malta’s reserves a lookout is maintained for such birds, especially gulls and terns, but also flamingos and waders.  When a colour-ringed bird is found, pictures are taken to attempt to read the code on the rings, sometimes from multiple photos. This is helping us build a better picture of the origins and life history of the birds we see which supports already known information but also sheds fresh insight.

Through these techniques, examples of the results include pinpointing the breeding sites for our gulls and terns in the Baltic States and that our turtle-doves breed in central and southern Italy and migrate to winter in central Africa just south of the Sahara Desert.

Our knowledge is never complete. The more we learn about the life history of our birds, the better we are prepared to safeguard them and their habitats. Most likely, through this, we are also safeguarding our own well-being as birds act as good indicators of the health of our environment.

Being an avid birdwatcher in Malta presents its challenges
No time to rest! 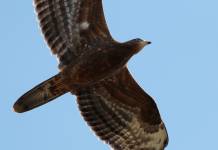 This year BirdLife Malta has launched its #onthemove campaign to showcase the beauty of the autumn bird migration spectacle. The campaign aims to inspire people to enjoy, care and protect Malta’s birds during the autumn migration. Visit the website to learn more about the campaign.

Members of the public are also being encouraged to log their bird sightings in a form which has been purposely created for this campaign here.

#5x5Challenge: How can I make a difference to the environment I...