Within the immediately foreseeable future, IT expert Prof Juanito Camilleri said that technology will be such that humans can converse with machines. In an interview on Newsbook Q&A, the Chairman of the newly set-up Epic spoke at length on the imminent technological changes which will continue to revolutionise our lives. Epic is a new company which has taken over from Vodafone, the company which had originally introduced mobile telephony to Malta.

Read also
Watch: Will we soon be speaking to machines? 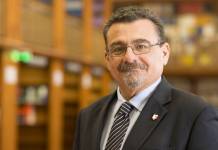 Prof Camilleri said that the development of mobile telephony happened over the period of a lifetime. He recalled the ‘mobile’ packs which the soldiers used to carry in WWII which needed an antenna and used to require cranking up to operate. Those, he said, were the earliest versions of a mobile phone. When the mobiles were introduced in the late ’80s, early 90’s, the sets were as big as a shoe and the range was limited as was the use: calls and messages only. Now, he said, with the advent of 5G, not only was the mobile phone a computer in its own right but could also give connectivity with the quality of a cinema screen.

But, asked Newsbook Q&A, was 5G, not a dangerous technology? Prof Camilleri demurred. He was clear that all technologies if badly used, are dangerous. He said that this is true of anything from a pill which can remove a headache to any other aspect. Prof Camilleri said that the technologies used by reputable companies are all certified by the WHO and used in accordance with the strict instructions issued by this world organisation.

Prof Camilleri repeatedly stressed the need for technology to be accessible. He said that in the current pandemic, the reliance on technology has meant that work could continue. He added that technology was also keeping people connected and this was, to some degree, mitigating the effects of loneliness and isolation perpetrated by the pandemic. This, he added was particularly true for the elderly. Newsbook Q&A asked if the new technology which was planned by the service providers was going to be kept at an affordable level, given that the population is ageing and the spending power of pensioners is very limited. “Yes definitely this is very important”, affirmed the Chairman of Epic, adding that this is an issue which needs to be addressed. He said that Epic is tabling proposals which ensure technology at a good price.

A glimpse into the future

In the next few years, Prof Camilleri said that it is probable that increased capability and sophistication in technology will lead to predictive machines which would, for example, indicate where traffic seemed to be piling up and direct traffic or even driverless cars to alternative routes. If this seems all a little sci-fi, he also spoke of direct communication between humans and machines. Prof Camilleri said that the increased throughput capacity will also benefit education where remote learning possibilities such as assisting virtually in surgery will be possible. “This is the internet of things,” said Prof Camilleri. He said that telecoms and Artificial Intelligence will increasingly work together to provide a new vision of the future.

Watch: Will we soon be speaking to machines?

Watch: Help students participate in a robotics competition in Dubai

No evidence acquittal for IT corruption case accused