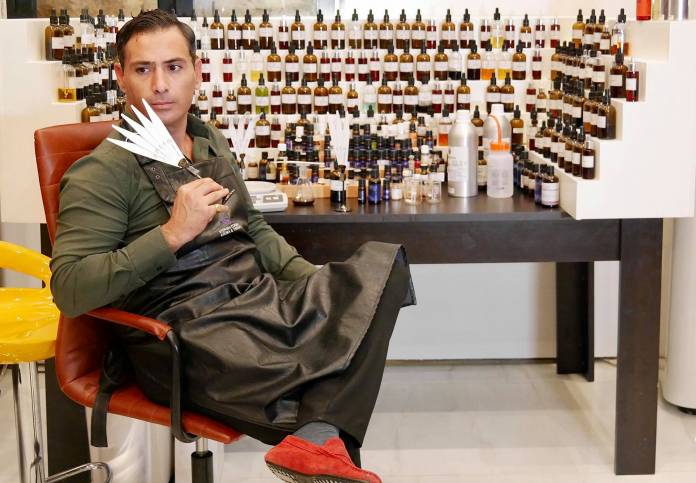 In the vaulted undercroft of the cloister of the Ursuline Sisters in Valletta is one of the most unique ateliers in Malta. Opened just recently, the flagship outlet and laboratory of renowned Gozitan perfumier Stephen Cordina is a treasure trove of fabulous scents, historical apparatus, and modern perfume-making.

Upon entering this 300m2 space, you will notice the gentle yet distinct smell of incense, based on a recipe dating back to Byzantine times. Going down a flight of steps, you will then come to the outlet, which stocks Cordina’s luxury perfumes, hand-made face and body products, and his signature candles whose molten wax turns into hand and body cream. Yet what makes this place truly unique is what lies beyond a small arched doorway to your right.

The first thing you will see here are the 18th century distillers, the heavy-looking antique pestle and mortars, and a little cabinet containing rare, museum-quality perfume boxes from Europe, the Near East, and Asia. To the left of this, there are a further four rooms, which are currently being turned into laboratories where Cordina’s team can make his brand’s soaps and candles by hand, while, to the right, is the perfumer’s organ.

“In the same way a pianist has a set of keys to play to create a symphony, so does a perfumer have a set of bottles to create a particular scent,” Cordina tells me as we come to a library containing over a hundred small vials organised into base, middle and top notes. Each of these flasks contains ingredients used in the craft. Some are rather well-known, like cinnamon, vanilla and rose, while some are rather strange, like ambergris, which derives from the digestive secretions of the sperm whale (sourced ethically from ocean waste rather than from the animal itself).

Cordina, who is the only Maltese perfumer recognised by the Société Internationale des Parfumeurs-Créateurs, uses these accords to create his perfumes the old-fashioned away, which requires extensive knowledge on each ingredient and an extremely sharp nose. Yet, what is truly fascinating is the way he seeks out inspiration.

“The Medina perfume, for example, is based on ingredients people believed could ward off the plague in the Middle Ages,” he explains. “These included citruses, sage, oakmoss, pine, and incense. However, I opted for the more ‘up-market’ version: exotic spices, imported from the East, were a luxurious option for plague protection. Those who could afford it, scattered cloves, cinnamon and fennel over their windowsills to scent the air as it wafted in. Oranges studded with cloves, which we now associate with Christmastime, originated as plague preventatives, too.”

A perfume Cordina is just about to launch is Aqua di Valletta, which traces the history of orange blossom water (ilma zahar) in Malta. This, Cordina tells me, is an ode to the building itself as it was from within this undercroft that the Ursuline Sisters distilled orange blossom water to be used as medicine, which they smeared on patients.

“There is also Aqua Mirabilis, which is a modern reconstruction of the perfume made for Queen Elizabeth of Hungary in the 1370s. Also known as The Queen of Hungary Water, this was the first perfume of its kind and it was the monk who invented it that went to Cologne, in Germany, and kickstarted the Eau de Cologne type of perfume.”

These wonderful stories, as well as many others, will soon be part of a tour of the premises Cordina is hoping to launch once the COVID-19 pandemic is over. Visitors will also be given the opportunity to smell ingredients in their raw form – quite a privilege considering some scents costs a fortune (one bottle of concentrated scent derived from roses cut exclusively in May, which is a key ingredient in the iconic Chanel No5 perfume, can cost upwards of €15,000).

Until then, the shop is open and there’s a whole world for you to discover, including perfumes inspired by San Anton Gardens, others inspired by Venetian and Commedia dell’Arte masks, and much more!