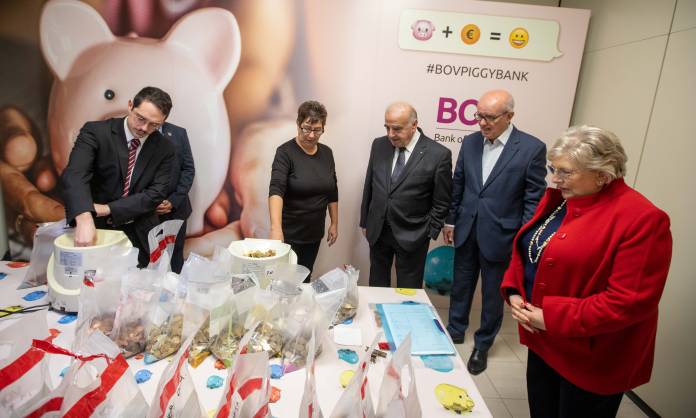 The L-Istrina BOV Piggy Bank Campaign sees Piggy Banks distributed in all primary and secondary schools in Malta and Gozo to create awareness about solidarity from a young age. All these Piggy Banks are then collected and coins taken to Bank of Valletta’s Head Office in Santa Venera for sorting and counting.

The President and Mrs Vella were greeted by BOV Chairman Deo Scerri, outgoing BOV CEO Mario Mallia and Designate CEO Rick Hunkin, both met with volunteers of the Malta Community Chest Fund Foundation and BOV employees, who were in the process of sorting and counting the large number of coins collected through this campaign.

‘This process is the final phase of the campaign, and is very laborious and time-consuming’, said the BOV Chairman. ‘However, it is also the most satisfying phase where we see the figure of funds collected rising with every bag of coins counted. No matter how small each donation is, when brought all together, these make a nice sum that we are very happy to present during the live broadcast of L-Istrina together with a healthy donation by the Bank.’

President Vella thanked Bank of Valletta for its cooperation on L-Istrina, the annual charity event that an in previous years is organised on Boxing Day, 26th December.  He said, ‘Everyday, the demands from the general public are increasing and thus the Malta Community Chest Fund Foundation is always in need of funds to be able to satisfy its objectives, that is, to cover expenses for cancer therapy and for social cases.’

The final sum collected through the L-Istrina BOV Piggy Bank campaign will be presented to H.E. The President during the live broadcast of L-Istrina on the 26th December 2019.