Pope Francis has consistently spoken out against violence, and has particularly condemned violence against women.

Last New Year’s Eve, footage of the pope slapping the hand of a woman who yanked his arm as he was greeting pilgrims, causing him pain, had gone viral. During his Angelus address the following day, the Pope went off-script to apologise for setting a bad example, admitting that he too lost his patience on occasion. But he also seized the opportunity to condemn the use of violence against women.

The pope also apologised to the woman in person in a brief meeting a week later, it emerged earlier this month. 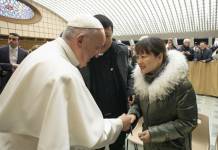 A selection of the Pope’s statements on violence against women