Archbishop Charles Scicluna said that Prof Oliver Friggieri drank to surfeit from the word of God, particularly in the form of poems which were a literary form much beloved by the deceased poet. The Archbishop was officiating the funeral mass for the poet whose literary works are considered as major milestones in the Maltese literary scene. Archbishop Scicluna said that God knows the weaknesses of humanity and keeps these in mind when dealing with humankind. To this end, the book of Psalm is a book of poetry which gives the reader a different insight into the word of God.

Read Also
The heavens themselves blaze forth the death of princes 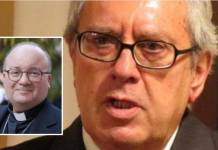 Friggieri, said Mgr Scicluna, spoke like a prophet who said that he had learnt to be a moderate since he was constantly learning on the foibles of humanity. He was pungent in his writings but never offensive said the Archbishop. “Today Oliver has met Reality,” said the Archbishop referring to the deceased poet’s encounter with his Maker.

Archbishop Scicluna concluded the homily with a reading of a poem he wrote a few hours after Prof Friggieri passed away.