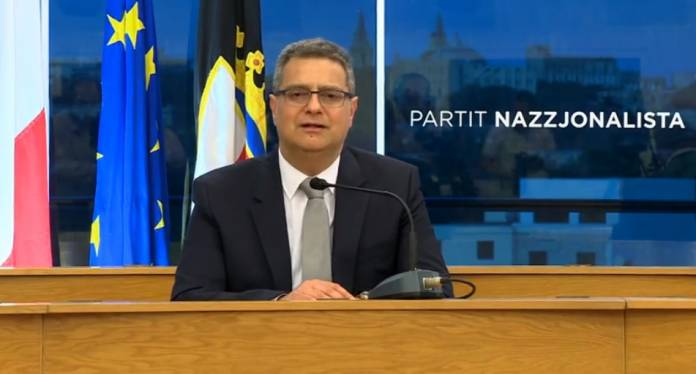 Dr Adrian Delia, leader of the Opposition, said that the Government MPs have betrayed the Maltese people when they did not support the motion proposed by the Opposition to give back to the Maltese the three hospitals that had been passed on to Vitals and then to Steward. For Delia today’s vote should have been a vote for Malta, an aspiration that was flouted by Government MPs who put their party’s interest above the national interest. He accused Government MPs of becoming accomplices of former Minister Konrad Mizzi in what Delia described as a heist of the three public hospitals.

He said that the PN has only one objective: that these three hospitals snatched from the hands of the Maltese should be returned to the Maltese to become as good as Mater Dei Hospital which provides the best health service in the world.

The leader of the Partit Nazzjonalista delivered this statement on Net TV to comment on the vote that had just been taken in Parliament.

Delia said that this vote notwithstanding he still promised Government all possible help to take back St Luke’s Hospital, the General Hospital in Gozo and Karen Grech Hospital. He promised that he and the Partit Nazzjonalist will continue to do everything legally possible to get “our hospitals back” and reminded viewers of the Court cases that he had instituted for this purpose.

The leader of the Partit Nazzjonalista said that the hospital had been originally given to Vitals, a company that no one knew anything of. Then it was passed on to Steward, a deal described by Minister Faerne as the ‘real thing’ thus confirming for Delia that the deal with Vitals was a ‘fake deal’.

“An arrangement to rob the Maltese”

Delia described the original contract with Vitals as “an arrangement to rob the Maltese people of hundreds of millions.” Although Fearne described Steward as the ‘real thing’ it now transpired, stressed Delia, that they had not kept their side of the bargain although the Government kept his part and as to now it passed on to Vitals and Steward €260 million. He said that no renovation or investment that had to be done in St Luke’s Hosptal, or Karen Grech Hospital or the General Hospital in Gozo.

Delia said that to make matters worse last August then Minister Konrad Mizzi signed an agreement with Steward giving them the right to receive one hundred million euros if the government rescinds the contract even if Steward defaults on its obligations.

He said that the millions given to Steward and Vitals could have helped the thousands of Maltese workers who are suffering from the economic impact of the coronavirus pandemic.