More than 3.95 million people have been reported to be infected by the novel coronavirus globally and 273,805 have died, according to a Reuters tally, as of 0214 GMT on Saturday.

The Middle East and Africa 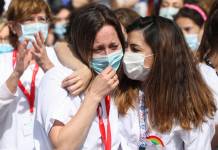 Cedric Farrugia   January 26, 2021
The Gozo Tourism association (GTA) said that guests should be adhere to the Health Authorities protocols. The association reiterated that self-catering accommodation operators should not be blamed if overcrowding occurs.