Opposition Leader Adrian Delia said that the economic model which the government has chosen is based on the increase in population. He noted that the number of foreigners is increasing every year.

Addressing Parliament ahead of his budget speech, Delia said that the government’s reaction to the Sunday “riot” at Ħal Far Tent Village was unsatisfying. He rebuked the government’s statement, saying that ‘it did not say anything’. He remarked that the Government organised a press conference costing €40,000 to announce the opening of a flyover, and for an incident like the riot on Sunday, the government resorted to a press statement in which it said that ‘a small group of people had instigated the riot’.

During his budget speech, Delia stressed that the social and environmental well-being need to be taken into consideration, asking whether the individual is actually benefiting. He noted that those who are on the poverty line did not see any improvement. ‘The government does not have a long-term plan’ Delia remarked, as he tabled Partit Nazzjonalista’s pre-budget document.

‘The country is facing three challenges: institutional, environmental and social’

Delia said that the Finance Minister mentioned that the country is facing challenges, however, did not identify them. He noted that these are institutional, environmental and social.

Mentioning the Moneyval report, Delia said that he never would have imagined that the country would be risking blacklisting. Quoting the Prime Minister, Delia said ‘if you fail to recognise a problem, you will never solve it’.

Reading out from various letters he received from youths and children, Opposition Leader Adrian Delia urged the government’s side to declare a state of climate emergency ahead of Tuesday’s vote on the Opposition’s motion.

He added that the government should seriously consider declaring a state of climate emergency keeping in mind future generations and prioritising the environment.

The Opposition Leader said that from the budget speech read out last Monday, it seems that the economy will not expand due to the addition of new sectors. He remarked that pensions are not sustainable unless the government continues to increase the population which will result in growth. 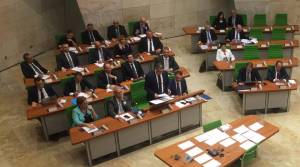 Delia rhetorically asked whether individuals were benefiting from the economic growth.

The Opposition Leader remarked that the Government ignored the 100 proposals put forward by the Opposition saying that it lacked substance.

Referring to statistics, the Opposition Leader said that these show that 46% of the workers were coming from EU member states while the majority or 54% were third country nationals (TCN).

Kurt Farrugia has a pay equivalent to that of nine teachers

The former chief communications officer to the Prime Minister has a pay cheque which is equivalent to that of nine teachers, Delia told the House on Monday. He followed up by referring to a statement by Malta Union of Teacher’s chief Marco Bonnici who had said that the budget for next year failed to address the issues in our education system.

“What happened to the Blockchain Island?” Delia asked on Monday. Delia remarked that no VFA licence was issued which is required to offer services in this sector. He quoted an email he had received from an expert who had observed that while Malta could have been a pioneer in this sector.

In parliament, Delia mentioned five individuals who acquired passport through the IIP scheme and who were charged abroad with fraud. He remarked that they continue to ruin Malta’s reputation.

Speaking about the sister island, Delia tabled a list of projects which have been promised to Gozo but have not materialised, yet.

He also spoke about the permanent link between Malta and Gozo and said that the government should see what the Gozitans think about the project. ‘They should be the ones to decide whether such project is needed.’

Opposition Leader Adrian Delia said that he hopes that the Prime Minister will take the decisions he should have taken when the Panama Papers exposed a government minister and the Prime Minister’s chief of staff of having offshore companies in Panama. Adding that he looks forward to see if the Prime Minister will be replying to APS CEO who warned that unless Malta safeguards its reputation, more banks will risk losing their correspondent bank.

Prime Minister Joseph Muscat will close the discussion on the budget on Tuesday. He will deliver his speech at around 6.30pm.

In a statement on Monday evening, Partit Laburista said that the speech of the Opposition Leader was “negative” and verged on the xenophobic. The party added that the Opposition ignored the increase in pensions, describing it as “the biggest increase” in the last forty years.

Amy Borg   August 10, 2020
Speaking to Newsbook.com.mt Hermann Schiavone also mentioned how he was ready to give up his seat in parliament three years ago when Adrian Delia was elected as the new PN leader.