The European Commission has hit Google with a record-breaking fine of €4.3 billion for breaching EU antitrust rules. According to the EC, since 2011, Google has abused its position to impose restrictions on Android device manufacturers and mobile network operators to cement the popularity of Google apps and services.

On Twitter, Google CEO Sundar Pichai shared a blog post which explained how this could spell out the end of a free Android service. 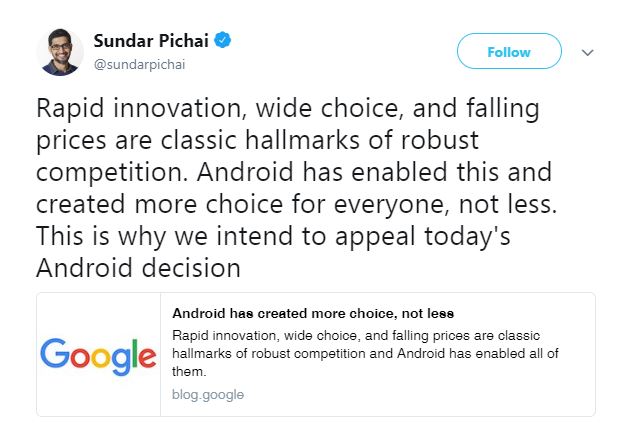 Pichai wrote that in 2007, Google chose to offer Android for free to phone makers and mobile network operators. Of course, there were costs involved in building Android, but they circumvented these costs in another way.

He wrote: “We earn revenue only if our apps are installed, and if people choose to use our apps instead of the rival apps.”

Thus, without the ability to ensure that Chrome and Google Search are always installed and used on all Android devices, Google can’t expect to make money in this manner anymore. This could mean that Google will now start charging manufacturers for Android, and in turn, could possibly lead to more expensive phones for users.

The Commission decision now requires Google to bring its illegal conduct to an end in an effective manner within 90 days of the decision.