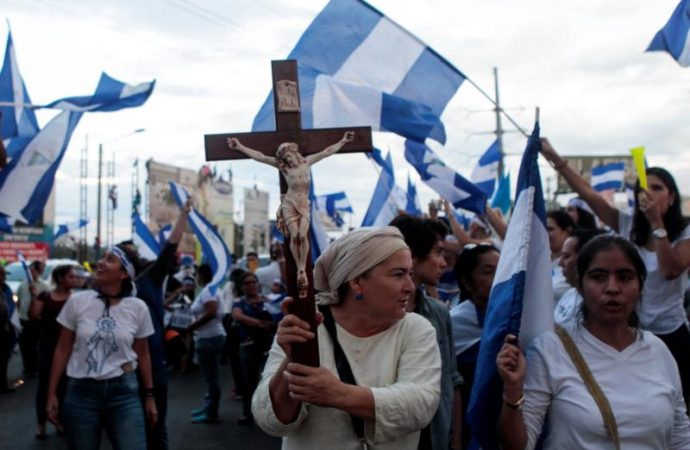 Blood continues to flow in Nicaragua as four people, including one adolescent, were killed by bullets last week, near Managua, the capital.

The Episcopal Conference of Nicaragua headed by Cardinal Leopoldo José Brenes Solórzano has attempted to strike a compromise between the government and the opposition in the central American nation whose people are 58 percent Catholic and 23 percent evangelical.

Born in 1949, Brenes Solórzano was raised at Ticuantepe, a small tropical village 50 kilometers south of the Nicaraguan capital. As a child, the young Leopoldo had only one dream: to become a priest. The eldest of a family of four children, he joined the Our Lady of Fatima seminary in Managua after completing his secondary school studies. He was ordained at the age of 25.

During the highly contested election of Daniel Ortega in 2011, Archbishop Brenes Solórzano condemned the coming to power of the former Sandinista revolutionary. “If the nation’s institutions held firm to the Constitution, they would not allow this illegal candidature,” he declared.

Seven years later, the situation has far from settled. A section of the population is now calling for the departure of Ortega and his wife, vice-president Rosario Murillo, who has been nicknamed “the witch.”

Fighting has already led to more than a hundred deaths and is threatening to degenerate further.

Given the extent of the social movement, Ortega wants Brenes Solórzano, who was made a cardinal by Pope Francis in 2014, to serve as “mediator and witness” between the government and the demonstrators.

After negotiating the liberation of arrested demonstrators, he accepted in April to act as intermediary while insisting that the government “avoid any violent act.” On June 15 Cardinal Brenes Solórzano and the bishops convoked the two sides to a consultation meeting, giving the cardinal yet another opportunity to call for peace.