Thailand’s King Maha Vajiralongkorn will grant royal funerals to the 29 people killed in a rampage by a soldier over the weekend in the country’s northeast, the Southeast Asian country’s prime minister said on Monday.

“Their majesties the king and queen would like to express their condolences … and would like to give moral support to all the victims’ families and the officials (who have lost their lives),” Prime Minister Prayuth Chan-ocha said.

“They have granted royal funeral ceremonies for the victims,” he added.

Mourners left flowers and written messages in front of the Terminal 21 shopping centre in northeastern Thailand where many of the victims were killed. 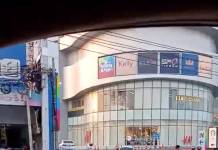 Soldiers, mall staff and volunteers cleaned bloodstains from the front of the mall in the city of Nakhon Ratchasima, while others laid wreaths.

“Even though they are not my relatives or someone I know, but just walking by, I don’t feel okay with what happened,” said Thanaphorn Tongweraprasert, 29, who lives near the mall.

Many of those killed in the attack were at the shopping centre, the last stop for the soldier, who held out against an overnight siege with weapons stolen from his army base before being shot dead by security forces on Sunday.

The soldier, angry over a real estate deal gone awry, began his rampage by killing his commanding officer at a private home on Saturday.

He moved on to his military base, where he killed a guard and stole high-powered weapons and ammunition from the armoury, and then fled in a stolen Humvee to a Buddhist temple, where he killed nine people before driving to the Terminal 21 mall.