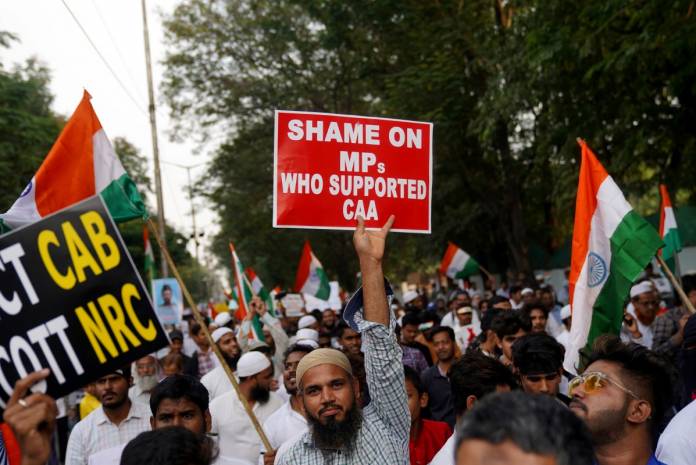 Over one hundred thousand protesters, many carrying the Indian tricolour flag, took part in a peaceful march in the southern city of Hyderabad on Saturday, chanting slogans against Prime Minister Narendra Modi’s new citizenship law.

The protest, dubbed the ‘Million March’, was organised by an umbrella group of Muslim and civil society organisations. More than 40 percent of Hyderabad’s estimated population of nearly 7 million are Muslims.

Demonstrators were still pouring into the protest site late on Saturday afternoon, according to a Reuters witness, despite police saying no march would be allowed and that permission had only been granted for a 1,000-person gathering.

The Indian government has faced weeks of acrimonious and, at times, violent protests against the Citizenship Amendment Act (CAA), which was passed by Modi’s government in December.

The Hyderabad protesters held placards with slogans including “Withdraw CAA immediately,” and “India’s only religion in Secularism.”

The Reuters witness said the protest remained peaceful, and estimated that more than one hundred thousand people were in attendance.

The new law eases the path for non-Muslim minorities from the neighbouring Muslim-majority nations of Afghanistan, Bangladesh and Pakistan to gain Indian citizenship. But, if combined with a proposed national register of citizens, critics of the CAA fear it will discriminate against minority Muslims in India and chip away at India’s secular constitution.

Modi’s government maintains the new law is necessary to help minorities facing persecution in Muslim-majority nations, and it has called the pan-India protests politically motivated.

At least 25 people have been killed in protest-related clashes with police since early December.

Elsewhere, protests against the CAA also went ahead in several other Indian cities on Saturday with hundreds turning out for protests in cities in the southern state of Karnataka.

Hundreds of men and women gathered at a rally in the tech hub of Bengaluru, with some accusing Modi’s government of trying to divide India along communal lines, to distract from a sharp domestic economic slowdown and job losses.

Monique Agius   April 4, 2020
Alternattiva Demokratika - The Green Party said that people's health comes first and that a new normal was needed once the pandemic is over. In a statement on Saturday, the green party remarked that the air is cleaner and that pollution levels have decreased due to the partial lockdown.

Coryse Borg   April 3, 2020
This book is a multi-disciplinary study which documents and brings to a conclusion an intensive restoration/conservation project that was carried out on the crucifix, popularly known as Ta’ Ġieżu, now unequivocally documented as the work of Frate Innocenzo da Petralia Sottana.

Spain to extend state of emergency to April 26 as rise...