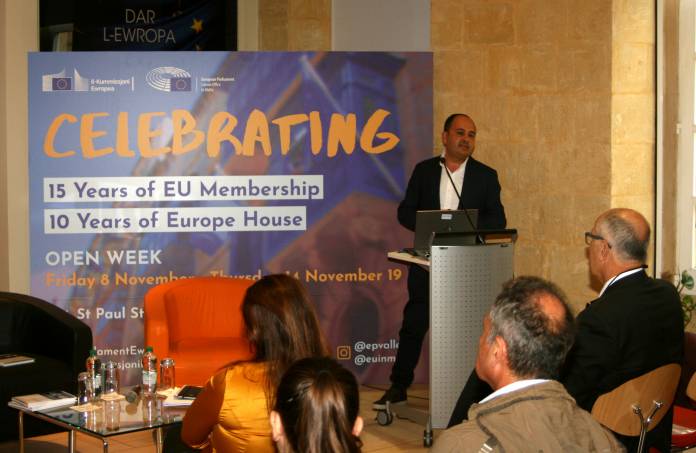 As one of series of events during an open week being hosted jointly by the European Parliament Liaison Office in Valletta and the European Commission Representation in Malta, Europe House today hosted architects Martin Farrugia, Konrad Buhagiar and David Zahra in a most interesting talk on the regeneration of Valletta.

Martin Farrugia gave a fascinating description of the works he had been responsible to undertake 10 years ago to transform an ancient palazzo into the Europe house it is today. He underlined certain challenges that were faced at the time, such as the restoration of the 17th century timber ceiling.

Konrad Buhagiar then talked the audience through a colourful description of the development of the city of Valletta over the years and its regeneration in modern times, giving more detailed and concrete examples of projects such as the Valletta City Gate and Strait Street.

On behalf of Heritage Malta, David Zahra spoke about how EU funds have been and are being invested in various Heritage areas in Valletta, not least the works that are currently being undertaken to restore the Grandmaster’s Palace in Valletta.

The talk was followed by an informal and nostalgic tour around the building by Dr Juliana Scerri Ferrante, whose great grandmother lived in the building towards the beginning of the 20th century.

For more information on Europe House and the activities of the both the European Parliament Liaison Office and  the European Commission Representation in Malta, members of the public may get in touch on epvalletta@europarl.europa.eu and comm-rep-mt@ec.europa.eu.