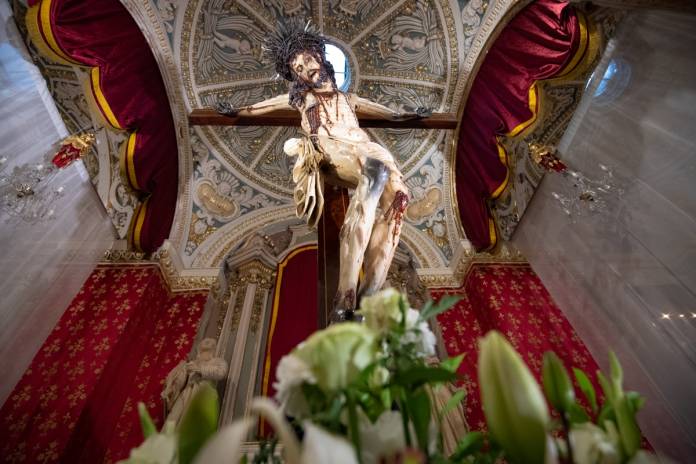 A multi-disciplinary study which documents and brings to a conclusion an intensive restoration/conservation project that was carried out on the Ta’ Ġieżu crucifix, popularly known as Ta’ Ġieżu, now unequivocally documented as the work of Frate Innocenzo da Petralia Sottana, is now available for sale.

The publication, entitled ‘Ta’ Ġieżu Crucifix: Faith, History, Iconography, Conservation’, was to be launched on the 27th March; however due to the current situation the formal launch has now been tentatively pushed to September 2020. Bank of Valletta are the main sponsors of the publication.

Archbishop Charles J. Scicluna writes a very interesting preface to the book which is divided into two broad sections. The first is made up of a collection of papers which deals with the historical, stylistic, iconographical and social aspects of the crucifix and all that went around it, namely: the archconfraternity of the Holy Cross and its sacred spaces, most notably, its crypt, chapel and oratory, the Valletta Good Friday processional statues and, last but not least, the historical relevance of the artist Frate Innocenzo da Petralia Sottana. The papers were written by Giuseppe Fazio, Roberta Cruciata, Simon Mercieca and Christian Attard.

Among the many arguments and ideas put forward by the authors there is also a reference to the San Marcello crucifix which we have recently seen behind Pope Francis during his special Urbis et Orbi blessing given in face of the current deadly pandemic. The Valletta Archconfraternity has been affiliated with the Arciconfraternita del Santissimo Crocifisso, to whom the San Marcello crucifix belongs, since 1709.

This book’s second section documents the diagnostic, conservation and restoration processes carried out upon the crucifix. The main contributors of this section are Charles Vella and Michael Formosa with additional short essays by Matthew Grima, James Saliba and Adriana Alescio.

Above everything else this book brings together a priceless array of images, over 195 pictures and illustrations, gathered from private and public collections which together constitute an important visual document of Innocenzo’s work. Another facet of this visual documentary aspect are the many forensic images that were taken during the various diagnostic procedures carried out on this work of art during the conservation programme of 2018-2019.

All those interested can acquire a copy by accessing the Archconfraternity’s Facebook page. A payment of €70 can be made by cheque or Revolut.