The majority of asylum seekers granted protection in Malta during 2018 were from Syria, new figures show.

According to new figures compiled and published by the European data service Eurostat, 230 Syrians were granted asylum in Malta (35%). This was closely followed by 225 Libyan asylum seekers (34%) and 80 Eritrean nationals (12%). This is commensurate with Malta’s size.

Syrians also represented the majority of recognition rates of the top 20 nationalities applying for asylum in the European Union, 88%. 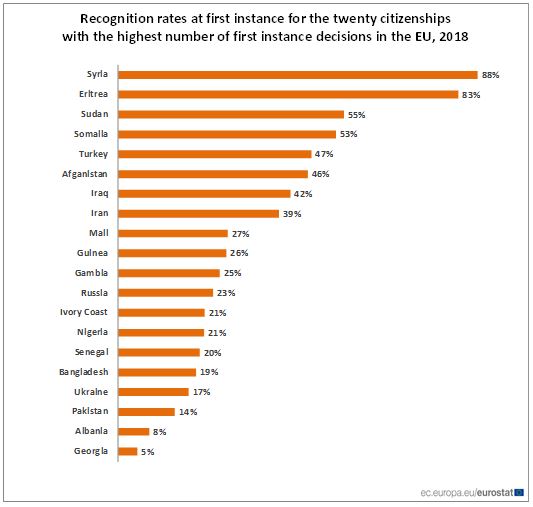 The majority of positive decisions given to asylum seekers ensured they were given Subsidiary protection in 2018.

Out of 660 positive decisions granted to asylum seekers, 480 people were granted this status while 160 were instead given Refugee Status.

Interestingly, Eurostat records that people receiving a final decision is considerably lower than those receiving a positive outcome in their first decision.

While 1,500 people applied for asylum in Malta in 2018,  under half (645) were given a positive outcome in the first decision, 42% receiving subsidiary protection.

As for final decisions on appeal, the numbers are considerably lower.  While 685 people went through the appeals process a fraction of only 15 were accepted on the final go. Only 2% were given subsidiary protection.