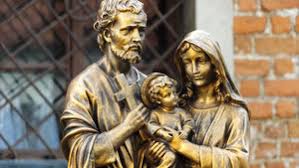 Addressing the faithful gathered in St Peter’s Square for the Sunday Angelus, Pope Francis explained that the Holy Family of Nazareth is made holy through “a gift of God”, and at the same time, because of their “free and responsible adherence to his plan”. The family of Nazareth, he explained “was open to God’s will”.

Looking at the Holy Family, Pope Francis began by analysing Mary, describing her “docility” at the action of the Holy Spirit. “How can one not remain amazed by it?” he asked.

Mary, like so many young women, was “about to solidify her plan for her life through a profound communion with her spouse”, he explained. However, when she became aware of the mission to which God was calling her, “she did not hesitate to proclaim herself ‘servant’”.

Turning then to the figure of Joseph, “the Gospel does not report a single word” on him, said the Pope. Joseph “does not speak, but obeys through his actions”. Pope Francis used the “delicate moment” in which he wanted to secretly send Mary away because she was pregnant as an example. “His choice”, said the Pope, was made so as not to be “an obstacle in God’s plan”, and so as to “allow Mary to be free to adhere to the divine will”.

Finally, the Pope looks at Jesus, the third member of the Holy Family of Nazareth. He is the “will of the Father”, said the Pope. St Paul says that in Him there was not a “yes” and a “no”, but only a “yes”. This, continued the Pope, manifested itself “in so many moments during His early life”:

“The episode in the temple when his parents who searched anxiously for him, he responded: “Did you not know that I had to be about my Father’s business?” He repeated continually: “My food is to do the will of Him who sent me”. His prayer in the Garden of Olives: “My Father, if this chalice cannot be taken away unless I drink it, may your will be done.”

All these events, said the Pope, are the “perfect realisation of these words of Christ, who said: Sacrifice or offering you did not desire. Then I said: ‘Behold, I come to do your will, Oh God’.”

Pope Francis concluded his address by saying that this Family represents a “choral response” to the will of the Father. The three components helped each other endlessly to “discover and fulfil God’s plan”.

The Pope prayed that the family be a model, so that parents and children might mutually sustain each other in adhering to the Gospel, “the foundation of the holiness in the family”.